Below are some ‘Keyword’ searches for ‘diabetes’ being googled daily by millions of people across the globe.

And it is for a reason…

Diabetes Mellitus Type 1 & 2 or largely known just as ‘Diabetes’, is a rampant chronic (slow developing) disease around the globe. It’s also one of the most searched because of increasing number of risk factors for diabetes and diabetes being the risk factor for many other diseases. It has significant effect on body and mind of individuals and greatly reduces their quality of life.

Coming back to searches, since we all believe Dr Google so much, and almost always end up searching (and believing) anything and everything about the disease we are diagnosed with. But we also know that most of us won’t succeed in even understanding the disease, let alone managing it well.

And there begins a tale of two diabetics….

An everyday common man, taking his car to work all the way across the city. The to and fro daily commute nearly leaves him drained. His 8 to 8 job makes him too tired to get up early and hit the gym. His desk job is convenient and is just an exercise of the mind. His weekends usually pass by doing house chores and shopping, a movie, may be a resort spa outing, some relaxation and back to Monday blues. His life is great and the biggest problem he currently faces is slow moving traffic and being conscious about his stomach paunch at 32.

As life goes by, he begins to feel tired all the time, fatigue becomes a daily thing, hungry in between meals, heightened craving for sweets, chips and snacks, too drowsy usually an hour before his lunch, forced to have early lunches and so on. This goes on for few months to about a year.

On a seemingly normal day, a routine check-up and blood test at the company (because he is too busy being busy for these check-ups to be a regular part of his life), it’s revealed that his blood sugar is off the charts, and he is diabetic.

This rings a bell in his head, and he thinks, now is the time to change and turn my life forever. And the first thing he does… search (not read) anything and everything about diabetes on the internet.

A series of statistics pops up, stating diabetes is so rampant, with close to 422 million people being affected worldwide. With the first few searches on how to fix it, he gets that his lifestyle needs some serious changes and that too immediately. No junk food, balanced diet and vigorous exercise; the whole package. He thinks, may be walking and working out at a gym everyday should become part of his routine. 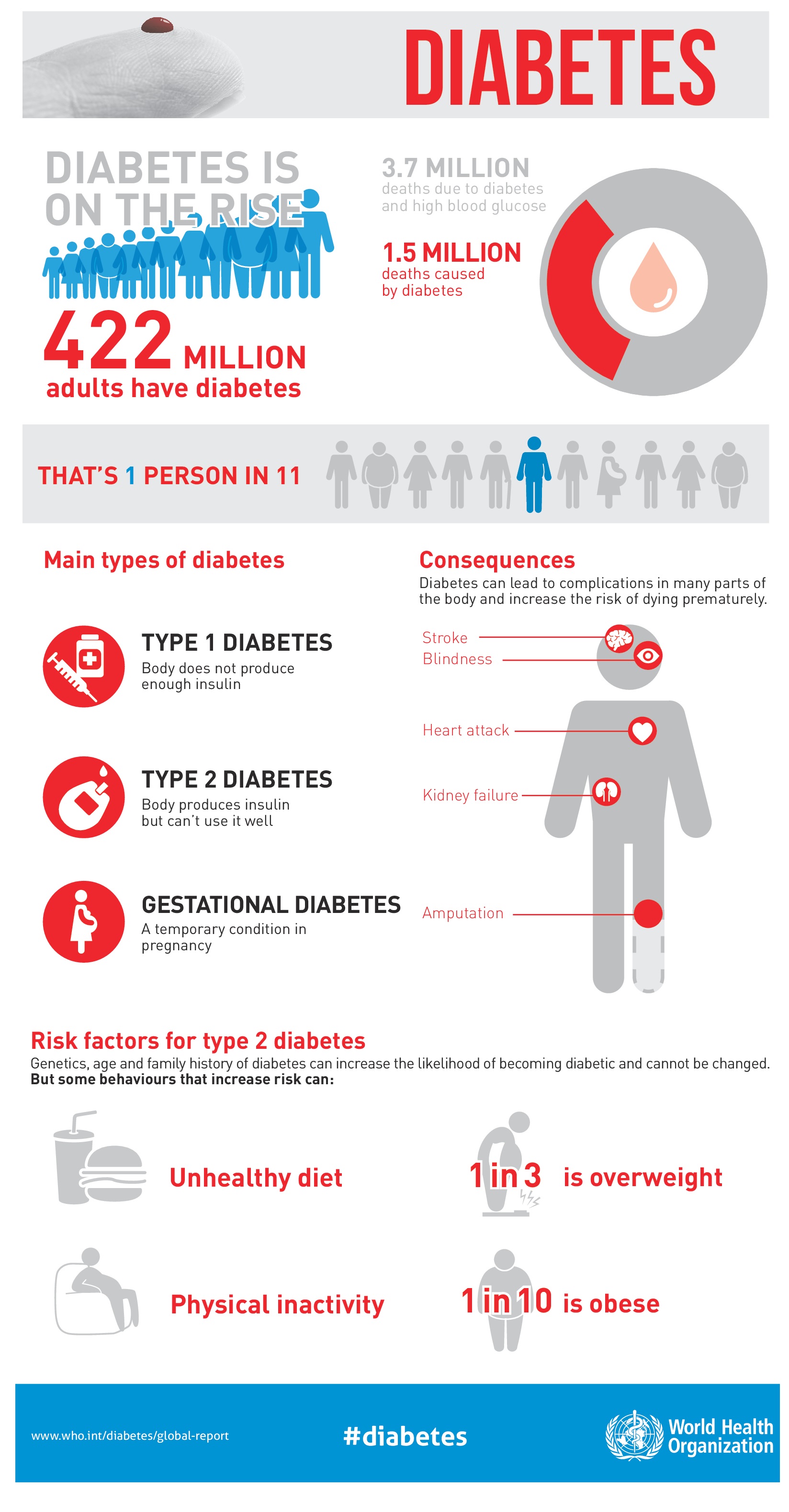 Then he digs a bit further, and starts to read about glycaemic index, and ...
what if the disease was diagnosed late?
what if it’s progressed far?
what if, if I can’t get my sugar under control, even with all the new diet and exercise routine I am planning.
Oh my god, my insulin production will get depleted at an alarming rate
I might have to take insulin intravenously to supplement my glucose metabolism
my quality of life will dangerously be deteriorated, and my family & friends will be concerned too much
Oh, this search also says I might get other disorders, liver problems and heart diseases, my kidney function could get affected forever, with increased risk for glaucoma
Oh damn, here it says if I get a cut on my leg, the wound will never get healed, it will get infected, and the doctors will have to amputate my leg
Oh god… Oh god… what will I do now

And… this downward whirl of “what-ifs” goes on for a while, and he gets so worried… so worried… that…
….he goes to sleep.

Next day morning, he goes back to his “so called regular life”.

Mr B on the other hand, having a similar lifestyle was also diagnosed with diabetes a while ago. He too, like most others, searched the heck out of google for all possible causes of and cures for diabetes. But, being a sensible man he is, without self-instigating much of panic or pressure, he starts to gather relevant information from credible sources, like doctors, clinicians and nutritionists. He too gets to know about glycaemic index and glaucoma, lifestyle and dietary changes that he needs to adopt, and most of the other information that Mr A got, but with actionable recommendations that are largely easy to implement in his lifestyle.

He also understands that, the long-standing notion that diabetes is only caused due to genetic factors or is largely lifestyle related (unhealthy diet, overweight, physical inactivity etc.), has been recently questioned. With the new and rapidly developing field of microbiome research, several new links have been established between gut microbiota and diabetes, not only to its causation but also to the drug efficacy, alternate forms of treatments and many more.

He realizes, for the first time, that there are trillions of tiny tenants living within his gut, forming several local communities, have a global impact on our body and mind, and have been known to play significant role in disease and health.

Now he is intrigued, and his interest is peaked…
And he continues to understand more.

The gut microbiota affects numerous biological functions throughout the body and its characterisation has become a major research area in biomedicine. Studying the relationship between microbial alterations within the gut and functional repercussions linked to disease(s) remains challenging, and even more complex when it comes to their interactions with therapies and drugs. Animal studies and other human trials have associated microbial patterns in individuals with diseases and traits, thereby implicating gastrointestinal microbial communities in a range of human disorders.

Oh… all this can happen from my gut? Inside out?

The complex relationship between obesity, diabetes, and gut microbiota is being uncovered, with consistent growing body of evidence. Presence/absence, relative and/or absolute abundance of specific microbes within the gut has been shown to have a direct impact on insulin sensitivity and glucose metabolism, adding an important dimension to understanding of diabetes. 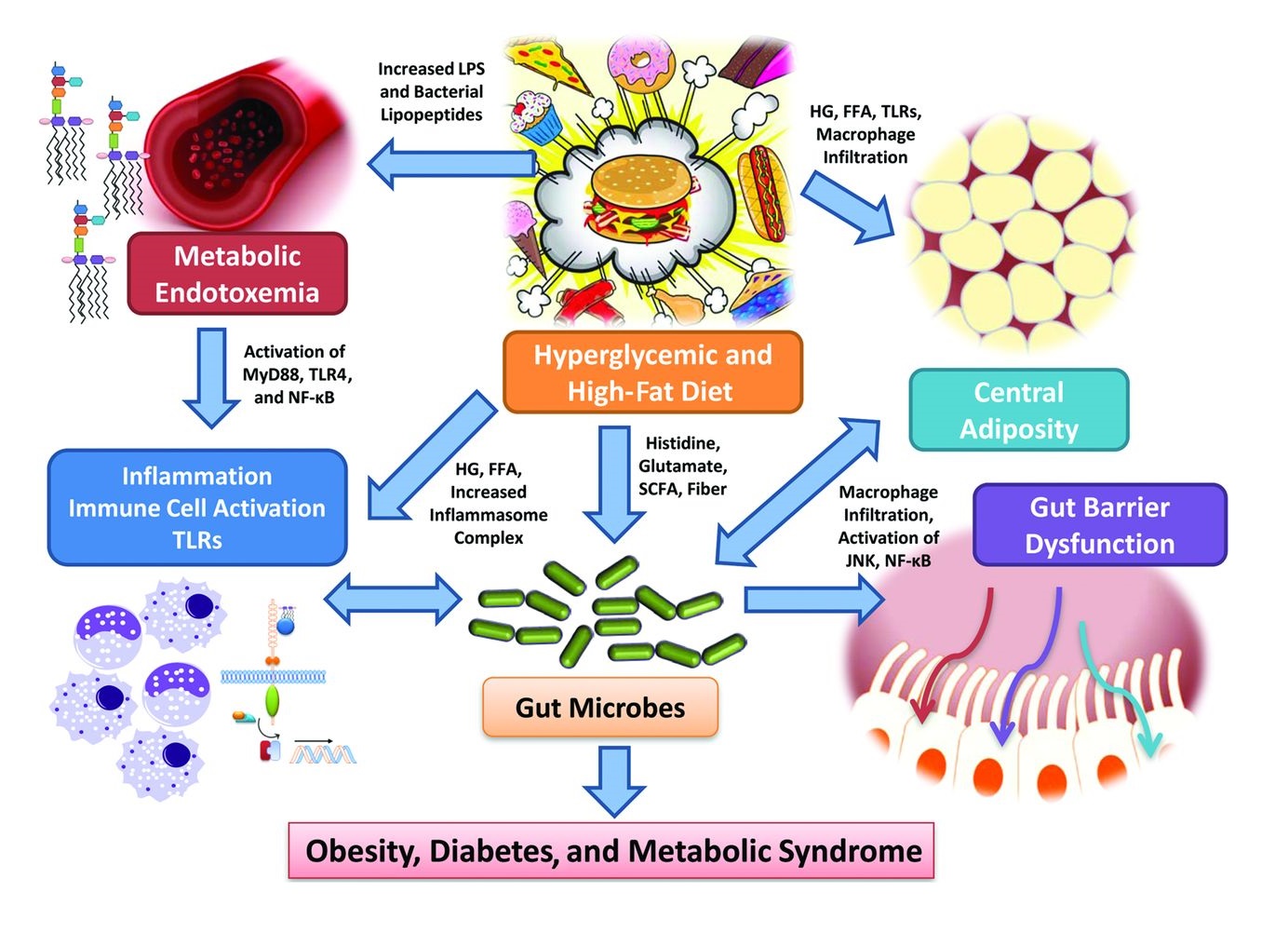 Now this is way too technical for me…
He quips!!
But he continues…

Then came a bunch of biological names like Collinsella, Oscillospira, Akkermansia (most of which he could not pronounce), followed by some more bio jargon about pathways and stuff. All he could get from the picture besides was the burger and high-fat diet. He also gets fascinated by realizing that metformin, which is one of the most common medication given to manage diabetes (which was also prescribed to him), not only helps to reduce the amount of sugar the liver releases into the blood but could also aid by improving the gut microbiome.

The most relatable thing that he grasps, by these searches and readings, was the extensive information about probiotics. It seems like probiotics can help a whole host of gut and other issues. Even though it is not proven to have absolute beneficial effect on diabetics, efficacy of probiotics in diabetes has been proven by their ability to lower fasting glucose and insulin levels in various. The link between gut dysbiosis and diabetes has been convincing and promising, particularly since probiotics have been shown to normalize the disturbed metabolism in diabetes patients.

he feels a sense of optimism...
but with a disclaimer that,
It’s hard to rule out the effect of other factors that may have affected glycaemic control in these studies, yet, this link between probiotics and alleviated diabetes is a promising new supplementary to metformin treatment, in lowering fasting blood sugar.

…and regarding probiotics, his take home message was that, probiotics undoubtedly have an overall positive outcome on diabetics, and its can greatly supplement the main treatment options to manage diabetes well for a long time.

Overall, he got the gist of it.
That,
His gut microbiome and gut health can greatly influence diabetes and by understanding and managing his gut well, he can manage his diabetes too.

Now, he took Google’s help (the right way this time around) to find a microbiome-based company providing testing services and evidence-based interpretation of gut microbiome, which can help him better understand and guide him to make optimal effective changes to his health and lifestyle. He sent his stool sample to the testing facility, followed up well, and received an extensive report, including his disease susceptibilities (diabetes and others), as set of customized dietary, probiotic and dietary recommendations, follow up with nutritionists and clinicians for further advice, overall a complete package. 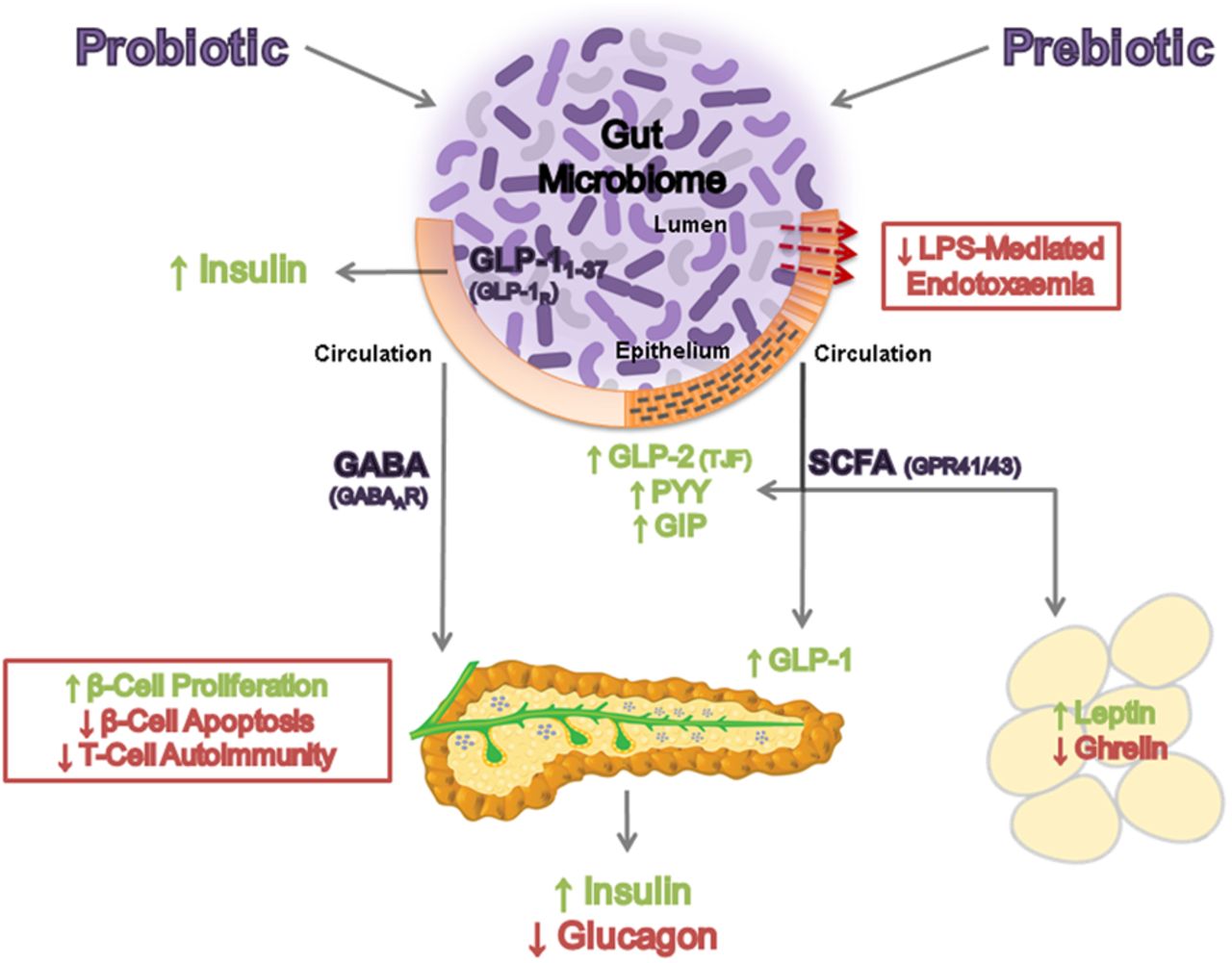 Having diagnosed early and his sensibility to understand and rely on credible sources, and to explore new avenues of diagnosis and treatment, aided Mr B with effective management strategies for diabetes. He inculcated all the necessary exercise and diet much early into his diagnosis, he took the help of nutritionists and turned around his life for the better, supplementing it with exercise and improved lifestyle. Now, that’s what we call a happy ending! 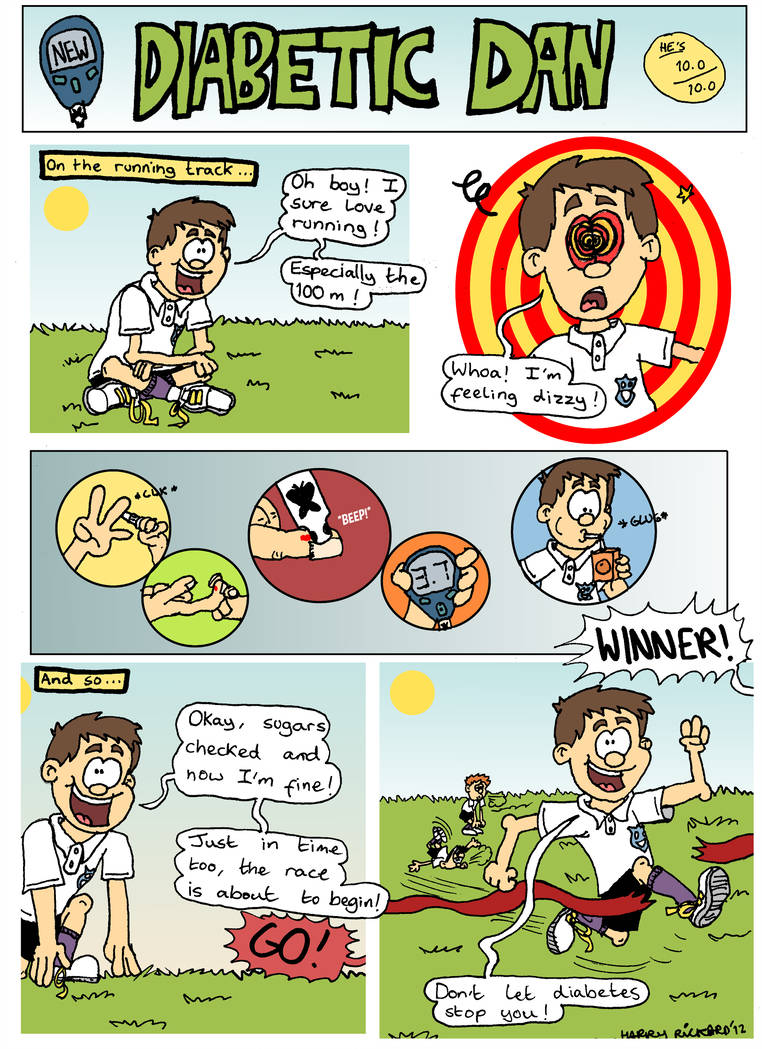