In recent years, the role of microbiome has been increasingly acknowledged for its capability to affect the development and function of the nervous system and numerous intricate host behaviors. The gut microbiome modulate the anxiety-like behavior, anxiety, social and communicative behavior, and influence the learning ability and memory. Several animal studies combined with the advanced sequencing, bioinformatics, mass spectrometry, and gnotobiotics approaches have witnessed that various societal behaviors and psychological disorders are associated with the interactions of gut-brain microbiota. However, till now, due to dearth of human studies, the relationship between gut microbiota and different behaviors is yet to be fully established. Interestingly, researchers have documented a definite role of the gut microbial composition influencing on human neurophysiology i.e., the development of brain, gene expression, and neural signaling across brain regions, such as the hippocampus, amygdala, frontal cortex, and hypothalamus.

The gut microbiome represents the collective genomes of all microbes, including bacteria, fungi, protozoa, bacteriophage, and viruses that live in our gut ecosystem. This microbial community includes both beneficial (good bacteria) and possibly harmful bacteria (bad bacteria). In the human gut, over 100 trillion microbes may exist, which is nearly 10 times the total number of cells found in the entire human body. In general, microbes harbor within the gastrointestinal tract soon after the birth and play a vital role in the human health, immunity, and various important biological functions, including the neurophysiology.

As said previously, several researchers have used rodent, chimpanzee, and other wild animal models to understand the gut-brain-microbiota interaction influencing the social and communicative behaviors, and cognitive behaviors. For example, microbiome-related modifications occur in animals due to a variety of volatile chemicals secreted by microbes, which function as olfactory signals. An animal's microbiome could influence on the communication. Likewise, odorant profiles control social isolation against attraction in insects. A high level of bacterial colonization on harvester ants increases the chances of an ant being attacked and driven out of the colony. Related effects were observed in the lower termite (Reticulitermes speratus), signifying that colonization with external microbes produces different scents indicating the entry of invaders into the colony.

In fruit fly, both larvae and adult flies preferred nourishment that was used by other larvae in comparison with new or fresh food. One more study revealed that fruit fly’s mating preference is controlled by the gut microbiota. In hyenas, the social versus lonely grown animals showed varied adjustments in specific microbial taxa. Also, there was a variation in certain volatile fatty acids produced in the social and lonely raised hyenas, which reveals a correlation between microbiome arrangement, odorant profiles, and social behaviors in mammals. Regardless of olfactory message being less prevailing in primates as compared to other mammals, evidences suggest that any deviations in the human skin microflora is linked to changes in odorant profiles. Nonetheless, the microbiome influencing on the secretion of pheromones leading to human behavior changes is yet to be understood in detail. 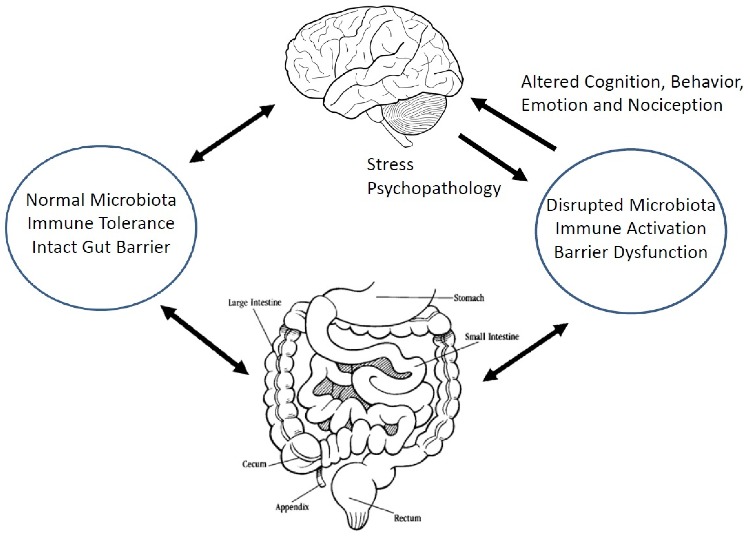 In a social approach study, germ-free rats when raised without microbial colonization showed diminished social behavior with microbiome-complemented rats. Juvenile offsprings of antibiotic-treated rats demonstrated different microbiomes with decreased social behaviors. Similarly, another study in mice has revealed that altered gut microbiota profiles is linked to poor social behavior. When mice were subjected to initial life stress (induced neonatal stress) by splitting newborn babies from their mother for 3 hrs per day, there was an increase in the gut abnormality as noticeable from the deviation in microbiota, which was correlated to the changed brain function as part of a bidirectional feedback loop. In Chimpanzee, having repeated social interactions certainly stimulated the microbial biodiversity required to maintain a good gut health.

Studies have witnessed that probiotics positively effect on controlling many stress-related behaviors. For example, chronically stressed rats, when treated with Lactobacillus helveticus NS8 significantly enhanced exploratory behavior in the open field and reduced adrenocorticotropic and corticosterone hormone levels. Matching human trials are deficient, but in a randomized placebo-controlled study, healthy humans treated with Bifidobacterium longum R0175 and L. helveticus R0052 showed lessened anxiety-related scores. Several findings have suggested that specific probiotic treatments may modulate learning and memory behaviors in animals. Thus, these emerging studies are encouraging towards finding a solution to treat various neurodevelopmental diseases characterized by stereotyped behavior, compromised social communication, and related to several medical comorbidities, including immune dysfunction and gastrointestinal problems. However, the exact role of gut microbiota influencing the brain and behavior or how fluctuations in the brain stimulate the colonization of microbial flora in the gut is poorly understood.

Overall, these research findings present exciting promises in solving many neurological disorders of humans, including anxiety and depression. Though many neurological phenotypes have been characterized in response to microbiota depletion/alterations, gnotobiotic interventions, and other microbiome-related stimulus, prime queries concerning how changes in microbiome modulate the host behaviors remain unanswered. In this regard, future clinical studies directed towards understanding the mechanisms underlying the gut-microbiota-brain axis using novel approaches are highly necessary.