Kefir is a friendly probiotic drink with slightly fizzy and tangy taste, a FANTASTIC fermented milk beverage originating from Eastern Europe and Southwest Asia. It looks like and tastes like thin yogurt, but far superior than others, as a probiotic. It is incredibly beneficial for digestion and gut health maintenance when consumed regularly. It is loaded with valuable vitamins and minerals and contains easily digestible complete proteins. People with lactose intolerance can eat kefir without problems, adding to its list of benefits.

Kefir can be prepared from any type of milk, cow, goat or sheep, coconut, rice or soy. It is made by adding kefir “grains” to milk. These are not grains in the conventional sense, but cultures of yeast and lactic acid bacteria. Over a period of 24 hours’ time, the microorganisms in the kefir grains multiply and ferment the sugars in the milk, turning it into kefir.

Even though Kefir has been widely recognized as a health drink with benefits, recent development in the field of probiotics, have raised enormous interest in Kefir, with researchers reporting a wide spectrum of progressive elements present in it benefits the person who is consuming it, as it is known for its anticarcinogenic, anti-inflammatory, and antipathogenic effects.

Unfortunately, misuse of the term probiotic has also become a common place and a major issue, with many products exploiting the term without meeting the requisite criteria. Consequently, there is a certain level of apprehension about these effects of Kefir, bringing it under the scrutiny. Can Kefir really show these effects in human, as most of the studies are done on mice and cell lines? If so then, what is the mechanism? What is the uniqueness of Kefir in terms of its bacterial composition?

Initially, some nutritional benchmarking has clearly identified the presence of beneficial components within Kefir (see picture below). “Antimicrobial and healing activity of kefir and kefiran extract” has also be studied early on, demonstrating highest activity against Streptococcus pyogenes. Further, Lactobacilli have been recognized as a major component of Kefir, which have GRAS (Generally Regarded As Safe) status. Of these, Lactobacillus kefiri has been identified as the key player in Kefir that has already assessed many functional properties, safety characterization and antimicrobial properties. However, parameters regarding safety of Kefir was imperative, before calling them probiotics. 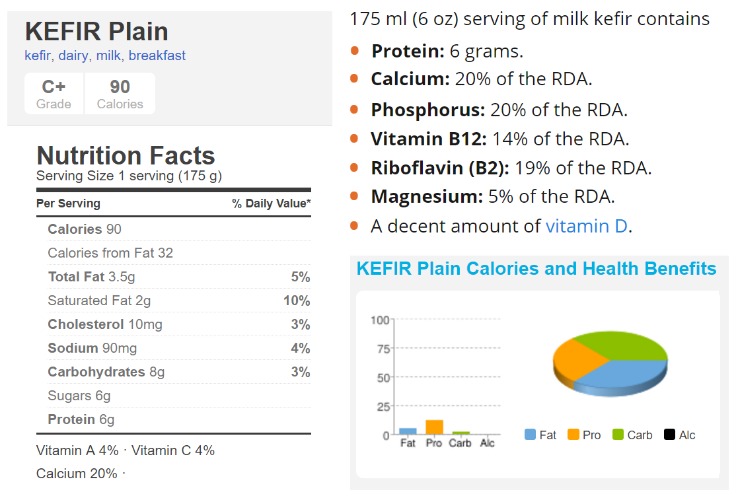 Paul Cotter, of Teagasc Food Research Centre in Cork, Ireland, approached the issue to answer such questions associated with kefir, employing tools of high-throughput sequencing to analyse the microbial composition of Kefir. His team of researchers performed Shotgun metagenomic sequencing of the microbial population of Kefir. Along with identifying the composition, they also determined the systematic progression of the microbial communities during fermentation. They observed that, as the fermentation progressed, the bacterial diversity diminished, and species that dominate the population at the beginning are replaced by others, just hours after. For instance, Lactobacillus kefiranofaciens was the dominant bacterial species recorded to be in kefir during early stages of fermentations, but Leuconostoc mesenteroides became more prevalent during later stages. They could further establish the link between individual species present in kefir, flavour generating compounds, several genes and associated pathways. They identified genes that are responsible for some of the intestinal benefits seen in kefir-drinkers. Through metabolomic approach they could map the acidic taste of kefir to the presence of Acetobacter pasteurianus and cheesy flavours to Lactobacillus kefiranofaciens. Additionally, they were able to change the flavour and taste of kefir by altering the ratio of these identified microbes.

Metagenomics, again, have proven to be a new way to look at bacteria, not only within hosts, but within commodities that have traditionally proven to possess health benefits. This whole new approach of analysis could in fact provide scientific insights and widen the consumer audience by imparting necessary knowledge to bridge the gap between traditional dietary & current nutritional practices.