Lymphocytes are white blood cells that form an important part of our immune system. B-lymphocytes and T-lymphocytes are two types of lymphocytes which aid in the defence of our body against foreign invaders such as bacteria, viruses, and other foreign toxins like poisons. When a lymphocyte comes into contact with a particle or cell that has surface marking molecules that identify it as a foreign invader (antigen), it does a tiny version of fingerprinting. B-cell recognizes that antigen and produces antibodies that are particularly built to combat the threat. There are five fundamental forms of antibodies called Immunoglobulins (Igs) - IgA, IgD, IgE, IgG and IgM. IgE is the antibody that is produced in allergic responses.

In a healthy immune system, Ig antibodies bind to disease cell surface antigens and destroy them, which is fine. But in case of an allergic reaction, the B-cells, are genetically "misinformed," about a generally harmless protein, produce high amounts of IgE antibodies and attach themselves to mast cells and basophils throughout the body, resulting in a reaction called ‘sensitising exposure.’ The mast cells (connective tissue cells) and basophils (white blood cells) both contain histamine, an important anti-infective weapon in the body's arsenal. Unfortunately, histamine is a potentially dangerous substance when it is released into the body in an incorrect or excessive amount. So, when the Ig antibodies destroy these cells, their reserves of histamine and other allergy mediators are released into the tissues and bloodstream. This causes a variety of allergic symptoms. So, when an allergy-sufferer ingests a particular allergen (the antigen) for the first time, the immune system tries to fight what it perceives as an invader. Swelling occurs and if left untreated, it may lead to a severe allergic reaction.

It is critical to understand that allergies are not the same as intolerances. As we have seen, allergies are immunological reactions of the body. Whereas, intolerances are non-immunological, non-allergic hypersensitivities. It's a physical reaction to some foods that aren't adequately digested or cause our digestive system to malfunction in some way. It happens when the digestive system lacks the enzymes or chemicals needed to break down and digest the food. As a result, if a person's body lacks the enzymes required to break down a particular food, he or she may develop food ‘intolerance’ after eating that item and not food ‘allergy’. 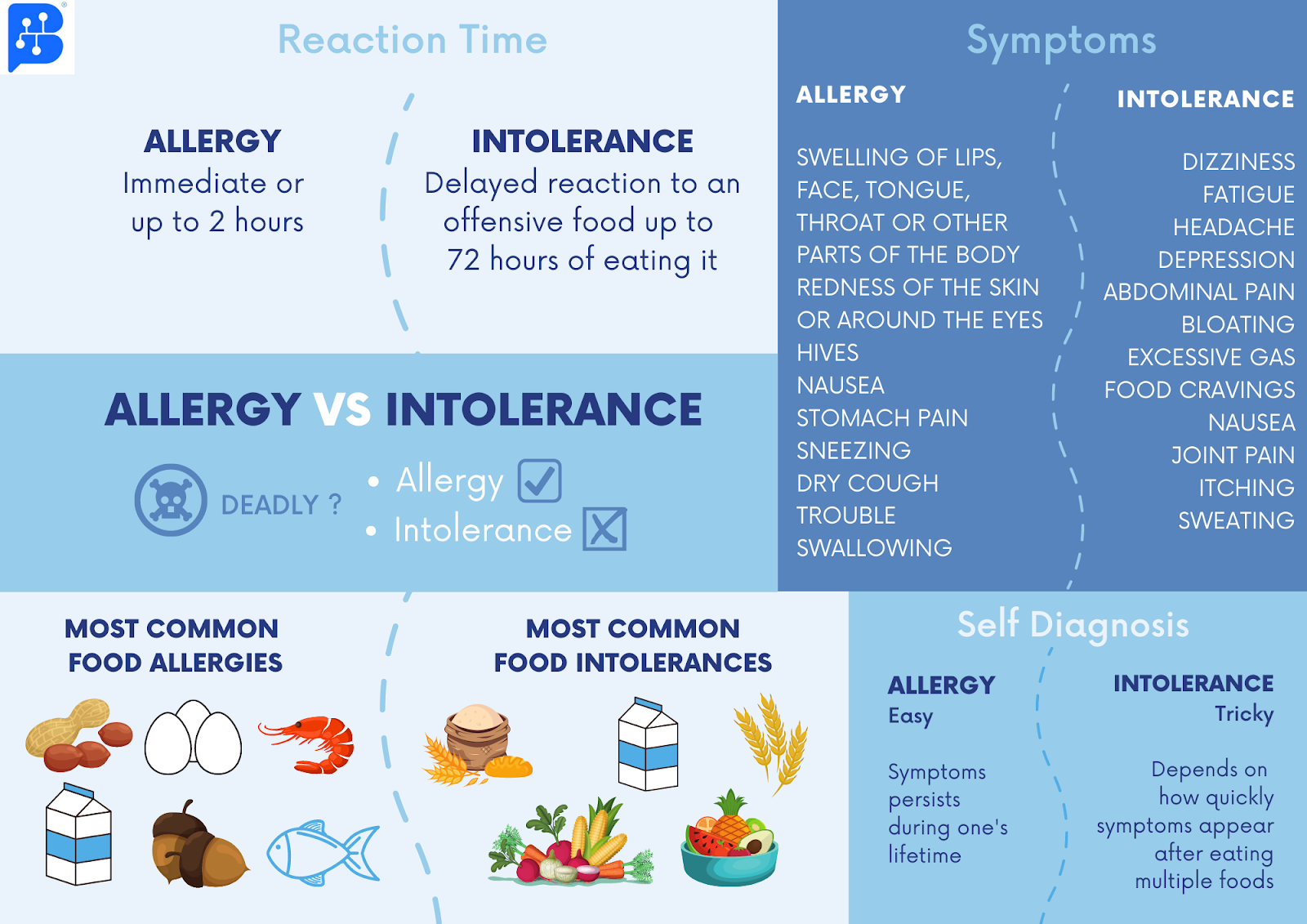 Both food allergies and intolerances have a substantial impact on the quality of life. They negatively impact physical health, reduce the enjoyment of eating, and cause a condition of hypervigilance for probable allergens in the food. Food allergies and intolerances have become much more common in the last ten years. There have been several attempts to explain why, but only recent studies have been able to pinpoint the critical factor, i.e our microbiota.

Our microbes help to grow the gut immune system and generate immunological tolerance. In fact, it wouldn't be wrong to say that the immune system is trained by our gut microbiome!

Immunological tolerance refers to the host's ability to differentiate harmless ingested or inhaled antigens from those that trigger an immune response. The less the inflammation, the more tolerant the immune system. The root cause of numerous diseases is heavily influenced by the breakdown of this tolerance. The adaptive immune system is important for distinguishing between self and foreign antigens, but the intestinal microbiota poses a challenge as it contains a large amount of foreign antigens like dietary substances and commensal bacteria which must be ignored or tolerated by the immune cells, in order to maintain health. Our microbes have evolved methods to decrease undesired inflammation. There is growing evidence that the mechanisms that regulate commensal bacteria tolerance are also important for maintaining immunological tolerance, which can prevent allergy and autoimmune disorders.

A rise in immunologically induced illnesses could be explained by a delay in immune function development during childhood, leading to a loss of immune tolerance. The interaction with the commensal microbiota of the gut helps promote the development and maturation of T-cells (like Th1,Th2, Treg).  Low or no early exposure to foreign antigens, according to the "hygiene hypothesis," may raise the risk of allergy disorders. The “old friends hypothesis” (a revised version of the “hygiene hypothesis”) claims that the presence of commensal bacteria is critical for stimulating Treg cells maturation, which is another type of T-cell called regulatory T (Treg) cell, having immunomodulatory or immunosuppressive capabilities. They are crucial for the maintenance of immune tolerance and play a key role in the control of inflammatory responses thereby enabling better processing of self or foreign antigens, and the induction of immunological tolerance.

Furthermore, allergic and non-allergic people have different gut flora, implying that changes in the normal human gut flora have a role in the development of allergies and intolerances. Bacteroides, Enterobacteria, Bifidobacteria, and Lactobacilli are the commensal bacteria that work with the gut's immune system to promote immunological tolerance. Lifestyle factors that reduce the amount of beneficial gut microorganisms can compromise this tolerance, leading to allergy sensitization and food intolerances. For instance, egg and milk allergies are linked to a decrease in Lactobacilli and an increase in Staphylococcus aureus in children. During the first two months of life, children with lower levels of Lactobacillus rhamnosus, Lactobacillus casei, Lactobacillus paracasei, and Bifidobacterium adolescentis were found to have a higher chance of developing allergy sensitization to cow's milk, egg white, and inhalant allergens. Food allergen sensitivity in children is also linked to lower levels of Bacteroides, Proteobacteria, and Actinobacteria. A lack of microbial variety also may predispose to the non-immunologic food intolerances such as gluten, FODMAP and histamine intolerance.

Therefore, it is clear that our microbes are vital for immunological tolerance and changes in the composition of the microbiota can lead to allergies and intolerances. We should be cautious about things that can greatly influence our gut flora such as antibiotic use, chemical exposure, nutrition and lifestyle. After all, prevention is better than cure. But sometimes there is little we can do about the way a baby is born, how they are nursed, or how much medication they are given. Synbiotics, which are a combination of pre and probiotics, have been shown to protect the microbiomes of newborns who are prone to cow's milk allergy. Hence, supplementing with probiotics, prebiotics and synbiotics can help repair the gut microbiota and increase the immune system's resistance to allergies and intolerances, among many other health benefits. You can discover our range of supplements here at Rychbiome!