IBD involves the transformation of cells of the inner lining of the gut causing simultaneous destruction and repair of the adjacent tissue. It operates in a person-specific manner in terms of location and behaviour of the disease. So just every superhero has their own super abilities, an individual with IBD presents an alternating pattern of intensification and reduction of the symptoms. Symptoms include abdominal pain, cramping, mild to severe diarrhoea, fever, low appetite, fatigue, and unintended weight loss. A severe form of the disease can even lead to life-threatening complications.

Though the exact cause remains undiscovered, both genetic predisposition and immune system malfunction may influence IBD. Environmental factors such as diet, lifestyle, antibiotic use, and socioeconomic development exaggerate the disease. 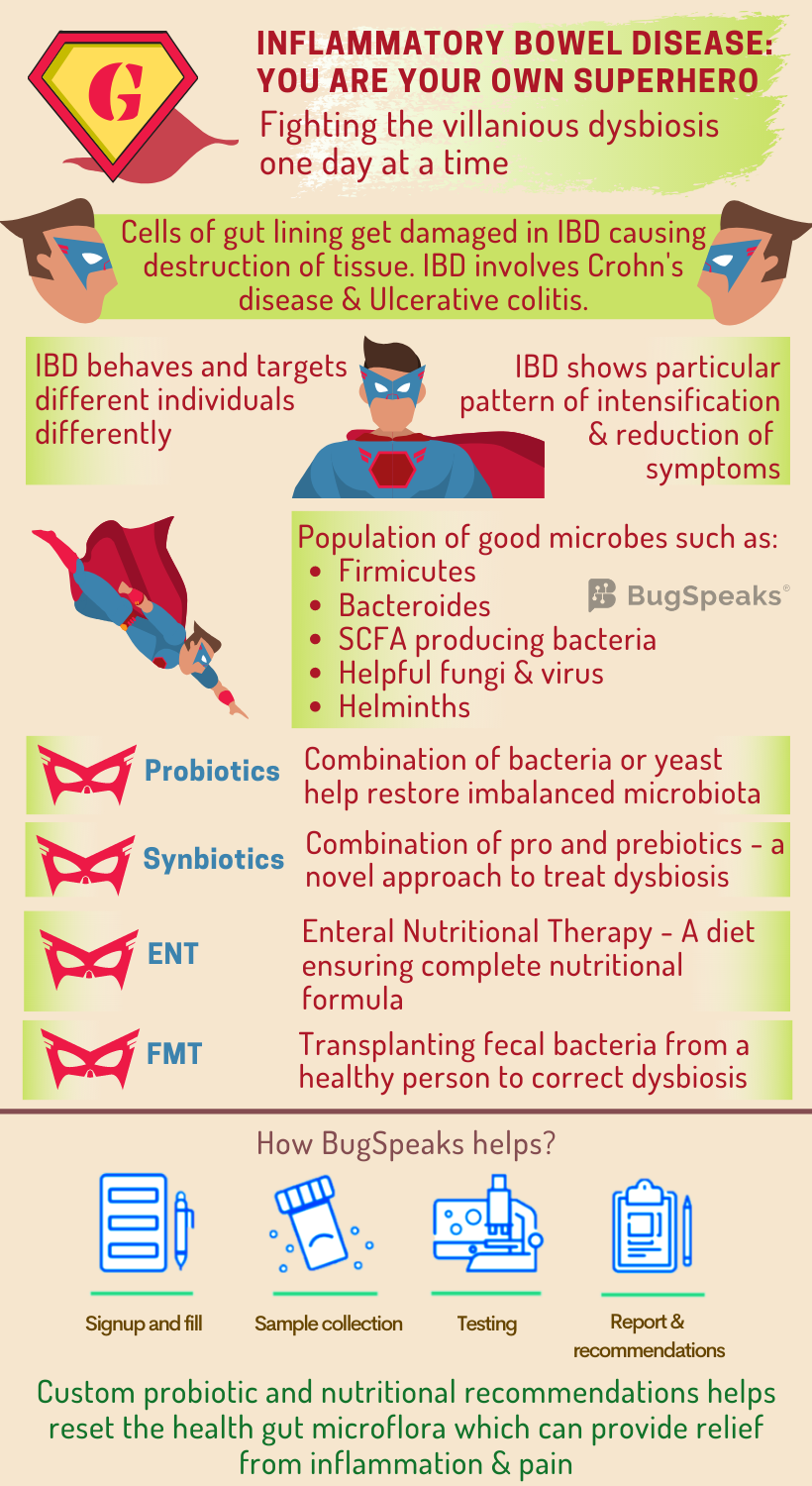 Looking for the IBD villain

As IBD involves inflammation of the gut mucosa, it is logical to associate the disease with the dynamic and diverse range of microbiome harbouring in there. The helpful gut bacteria inhibit mucosal inflammation and thus act as a shield against IBD. The diversity of beneficial gut microbes declines during the diseased conditions and the equilibrium between commensal and potential pathogen shifts. This villainous takeover of harmful microbes in the gut thus relates to dysbiosis. Moreover, due to the person-specific diversity of gut microbiomes, significant differences occur in equilibrium shifts between different individuals. Beneficial bacteria such as Firmicutes and Bacteroides decline. Pathogenic Gammaproteobacteria, Veillonellaceae, Pasteurellacaea, Enterobacteriaceae, Fusobacteriaceae, and adherent-invasive strains of E. coli populate the gut.

Villainous scheme of things in IBD

Amongst the array of microbes affected in IBD comes a set of specific bacteria that ferment indigestible fibres to produce short-chain fatty acids (SCFA). The SCFA producing bacteria, Faecalibacterium, Leuconostocaceae, Phascolarctobacterium, and Roseburia suffer depletion in the gut. As epithelial cells of colon feed on the energy produced by the SFCA, such decline further disrupts the gut energy metabolism.

Other important function of gut microbiota includes synthesis of some vitamins, enzyme secretion, retention of intestinal mucosal integrity, and educating the gut immune system to prevent the pathogenic attack. Also, they take care of the host by a phenomenon ‘called colonization resistance,’ where they occupy host niches leaving no empty spaces for invading pathogens.

The gut of healthy individuals also harbours certain beneficial fungus-like, Saccharomyces, Candida, and Cladosporium and helpful viruses like bacteriophages, Caudovirales, and Microviridae. However, the abundance of some harmful fungi like Basidiomycota, and Ascomycota elevates significantly in IBD patients. Another candidate belonging to the healthy gut microbiome is helminths, playing an immune-regulatory role in the gut. Their absence also finds a link with IBD development.

What can help the superhero fight IBD villains?

Usual therapies for IBD are corticosteroids, amino-salicylates, and immunosuppressive agents. This symptomatic treatment acts as a quick fix and helps to get rid of complications. Such treatment also comes with adverse side effects, including loss of immune tolerance and drug resistance. Thus, an alternative effective therapeutic strategy remains the need for the hour. The possibility that gut microbes drive inflammation in IBD inspires several clinical approaches aimed at correcting dysbiosis. These include dietary or microbial interventions like the use of probiotics, antibiotics, defined enteral nutritional therapy (ENT), and faecal microbiota transplantation (FMT).

Probiotics are a combination of bacteria or yeasts with apparent beneficial health effects that serve to restore gut microbial balance. A cocktail of eight live freeze-dried bacterial species has shown to reduce active inflammation and sustain remission in UC, but not CD. Friendly bacteria, Faecalibacterium, has shown a protective effect on the intestine by producing SFCA, responsible for barrier-enhancement and immunosuppression. Specific probiotic interventions have shown promise; however, the quest to link clinical improvements of IBD to probiotic-induced microbiota changes continues. Also, fundamental questions regarding the optimal composition of probiotics, timing of administration and durability of the response remain unanswered.

Synbiotics, a combination of pro- and prebiotics, exert a beneficial effect on host health through working together of two formulations. Pro- and prebiotics in combination, present a novel approach with promising opportunities to evaluate their efficacy and potential use in IBD.

The diet of an individual exerts a significant effect on the composition of their gut microbiota by altering gut functionality and metabolism at the genomic level. One treatment called ENT utilizes the potential of dietary modification. When food is replaced with a nutritionally complete formula in ENT, it can act as a first and foremost line of therapy IBD remission. This treatment results in both clinical improvement and mucosal healing. The idea of providing a fibre-rich diet that can selectively increase the abundance of SCFA-producing microbes remains attractive. Yet, satisfactory outcomes have not been confirmed.

Antibiotics can ease inflammation, and people often pop them frequently. However, non-specific targeting of gut microbiota with broad-spectrum antibiotics could deplete both beneficial and pathogenic microorganisms. Well, punishing the innocent microbes often comes at its cost, often seriously compromising health. In such a situation, Faecal microbiota transplantation (FMT), or a stool transplant can help. Also helpful with dysbiosis sans antibiotic intake FMT includes transplantation of faecal bacteria from a healthy individual into a recipient. It helps restore the gut microbial homeostasis posing a potential strategy to correct dysbiosis in IBD.

Overall, data regarding FMT remains scarce. A few points like the safety and durability of this approach, the most effective mode of administration, particularly in immunosuppressed patients, and how to select appropriate donors and recipients should be taken care of. More extensive randomized controlled trials are necessary for a better understanding of the process and to better define the role of FMT in the treatment of IBD. In the future, FMT will be probably be substituted by the use of a defined array of micro-organisms.

Winning the battle against IBD

IBD and gut microbiome are closely associated with each other. So, to know the actual scenario of your gut, it is essential to take a ‘Gut Microbiome Test.’ Modern age ‘DNA sequencing technology’ and algorithm-based data acquisition helps to identify the person-specific array of micro-organisms in patient stool samples are. A therapeutic plan consisting of combinations of prebiotics and probiotics are formulated based on the unique microbial population residing in the gut. IBD is not curable. But there is nothing to lose confidence. The one and only way are to manage the signs and symptoms intelligently. Long-term remission is quite possible, with proper guidance and expert advice.