Whether one agree or not, all genetic disorders are communicable, and more precisely should be categorized as Sexually Transmitted Diseases (STD), since they are passed down from parents to children during conception.

While that was the ‘pun’ny side up to begin with, its long been established that most, if not all, diseases have some genetic component that runs through the family. These genetic disorders mostly manifest due to malfunctioning of certain genes, in turn because of specific mutations (a small yet effective change) within these genes. If you have such mutation(s), there is a high probability that you got it from your parents and at the same time your children can inherit them from you.

This is easier to understand when you possess a single mutation within a single gene that is responsible for a single disease that you might have (often called monogenic disease, example: Sickle Cell Disease). When you pass on this mutation to your child, there is a high probability that they will get the same disease. But, most of the diseases are polygenic in nature, where multiple mutations gather around, play their part individually and cumulatively to cause disease(s). For example, the genetic disease-mutation database ClinVar enumerates as many as 231 mutations for OBESITY. Even though, passing on a few of these 231 mutations to a child might be enough to cause obesity, inheritance of multiple mutations is a complicated process, making it almost a random phenomenon. Still, it is quite overt that obesity runs through the family. Which gives us to wonder, what are the other variables that can cause obesity within a family? is it diet? perhaps lifestyle or something else?

Potty and the Belly

Diet has long been associated with obesity running within a family, largely blaming the potbellies to similar kind of diet the family follows. Talking of potbellies, here’s a very interesting experiment that was conducted at the Washington University School of Medicine, where researchers transferred ‘poop’ from twins discordant for obesity (obese and lean) into the gut of two different adult mice. Guess what happened? Mice receiving poop from the obese co-twin exhibited a significantly greater percentage increase in body fat over two weeks than the mice that had poop transplanted from the lean one.

Reason? It’s obvious when you stuff a gut through mouth, it’s going to bloat.

But the researchers had a more plausible explanation; A ‘metagenome’ study (composite of human genes and genes present in genomes of trillions of microbes residing in our bodies) revealed that the ‘poop’ of obese co-twin has greater relative abundance of Firmicutes (a division of bacteria) compared to that of lean co-twin. To be precise, the ratio of Eubacterium rectale: Bacteroides thetaiotaomicro was significantly higher (7.3 vs 1.5) in the gut of obese than leaner one.

So, now it was clear that “communicability” of obesity was not only due to genetics, and also not due to stuffing the ‘stuff’ into one’s pot, but mostly due to the kind of bacteria within one’s gut.

When they delved deep into the mechanism, it was found that the genome of E. rectale has forty-four glycoside hydrolase enzymes, that significantly increased the degradation of dietary starches. These observations indicated that increased abundance of E. rectale in the gut increased the concentration of end-product of starch metabolism, further increasing the capacity for more energy harvest from the diet, compared to individual with lower E. rectale abundance from the same diet. So, more calories absorption from diet, more likely to be obese, largely driven by gut bacteria. 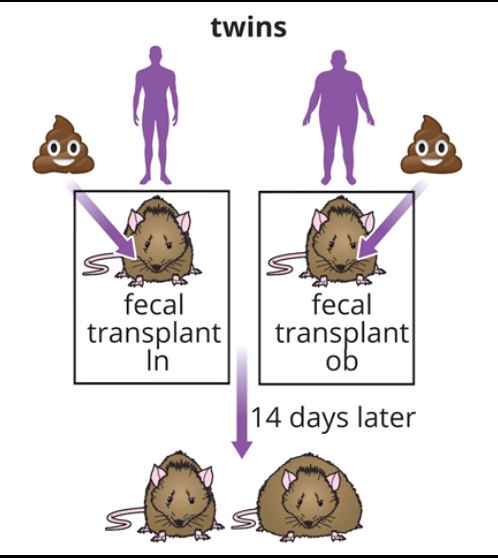 Since then, similar studies have been carried out in humans and results have corroborated earlier findings, along with identification of more types of bacteria (and other gut microbes) to be associated with weight gain as well as weight loss. These findings have provided long due support to the much-debated concept that gut microbiome should be considered as a set of genetic factors, together with host genotype and lifestyle (energy intake and expenditure), that can cumulatively contribute to the pathophysiology of obesity. Even though these small alterations in efficiency of energy harvest from diet, as a result of changes in gut microbial ecology, does not significantly contribute to obesity, over the course of time, this can result in significant changes in body weight.

This brings us back to the question we pondered, how does obesity run in family? Genetics apart, when you grow in the same family, you have similar foods and opt similar lifestyle (different when compared to granny, of course). While, this similar diet seems to be the most probable cause, it’s the similar kind of microbes within the gut (that establishes due to this diet), which makes obesity run in families. Hope this explains.

So, since it’s not all genetics (and out of our hand), can we deal with obesity differently?

Answer is, most certainly!!

To understand such associations between gut microbiome and obesity (and many other diseases), there is a separate branch of science called “Gut-Microbiome” analysis. DNA extracted from bacteria present in stool of an individual can now be quantified and analysed for bacteria (also fungi, archaea and virus). With reference to prior information (some mentioned above), the role of gut bacteria and their abundance can be interpreted to understand obesity within both clinical as well as wellness domains. Even better, by changing the composition of these gut microbes, through prebiotic/probiotic supplementation, can aid you to deal with obesity in a much efficient way.