Let’s begin with our birth...

These oligosaccharides, along with many other components of food, now constitute a class of food and supplementation called “Prebiotics”

Prebiotics are dietary substances that selectively promote proliferation and activity of beneficial bacteria indigenous to the colon. The concept, first developed by Gibson and Roberfoid in 1995, has been refined and redefined on several occasions. Prebiotics are currently defined as “selectively fermented ingredients that result in specific changes in the composition and activity of the GI microbiota thus conferring benefits upon host health”.

Prebiotics alone can offer protection against a range of chronic diseases or conditions common in humans, like IBD, Type 2 Diabetes, Obesity, CRC etc., by preventing colonization of enteric pathogens. However, the most ideal and effective prebiotic would also be able to improve bowel function, metabolic potential, mineral bioavailability, immune modulation and most importantly support the growth of a diverse set of beneficial microbes in the gut. 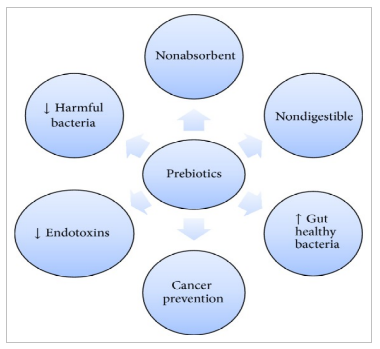 How does it work?

In context, the most important effect of these prebiotics and their fermented products is to selectively alter the taxonomic composition, abundance and activity of the colonic microflora, eventually conferring demonstrated health benefits. For example, prebiotic supplementation can beneficially enhance Bifidobacterium spp., the most dominant and beneficial flora of the gut. The beneficial effects of the these bifidobacteria is critically dependent on their viability and metabolic activity, which in turn is dependent on the presence of complex carbohydrates such as oligosaccharides and their metabolic products. Therefore, prebiotics are largely considered as bifidogenic factors and has been effectively utilized in diet applications.

Either way, the end products of such fermentation are largely short chain fatty acids, including acetate, propionate and butyrate. These may further be metabolized systemically or locally to generate energy for us. However, they also play several other key roles that can promote heath, as depicted in the figure below. 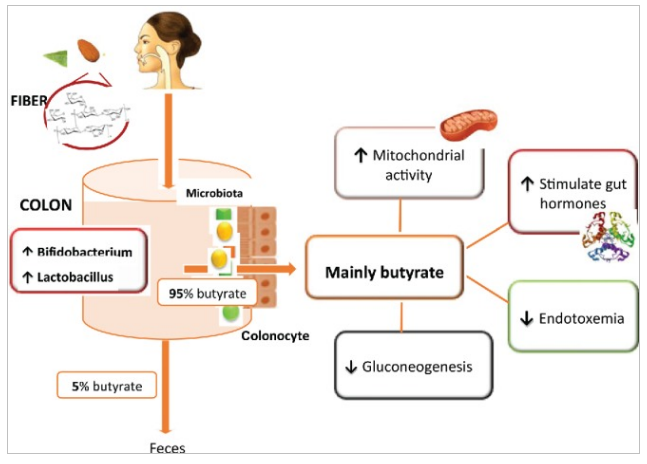 Great!!
So… where do I find these prebiotics?

Oligosaccharides have been proposed as the quintessential prebiotics that includes a whole set of short-chain carbohydrates, mostly nondigestible by humans, but are great food sources for the gut microbes.

Fructan prebiotics such as inulin and FOS occur naturally in various foods including cereals, fruits and vegetables and so are ubiquitous in most diets. The genera that uses these oligos and which contribute the most to our health include Ruminococcus bromii, Roseburia intestinalis, Eubacterium rectale and Faecalibacterium prausnitzi, but there are many others that may benefit from these prebiotics. Much of the interest in these oligos are also because of the fact the more than 36000 plants worldwide contain FOS. And inulin and other fructans are commonly found in onions (2-6%), garlic (9-16%), leek (3-10%), banana (0.3-07%), asparagus (10-15%), Jerusalem artichokes (15-20%), chicory (13-20%) and even wheat (1-4%). 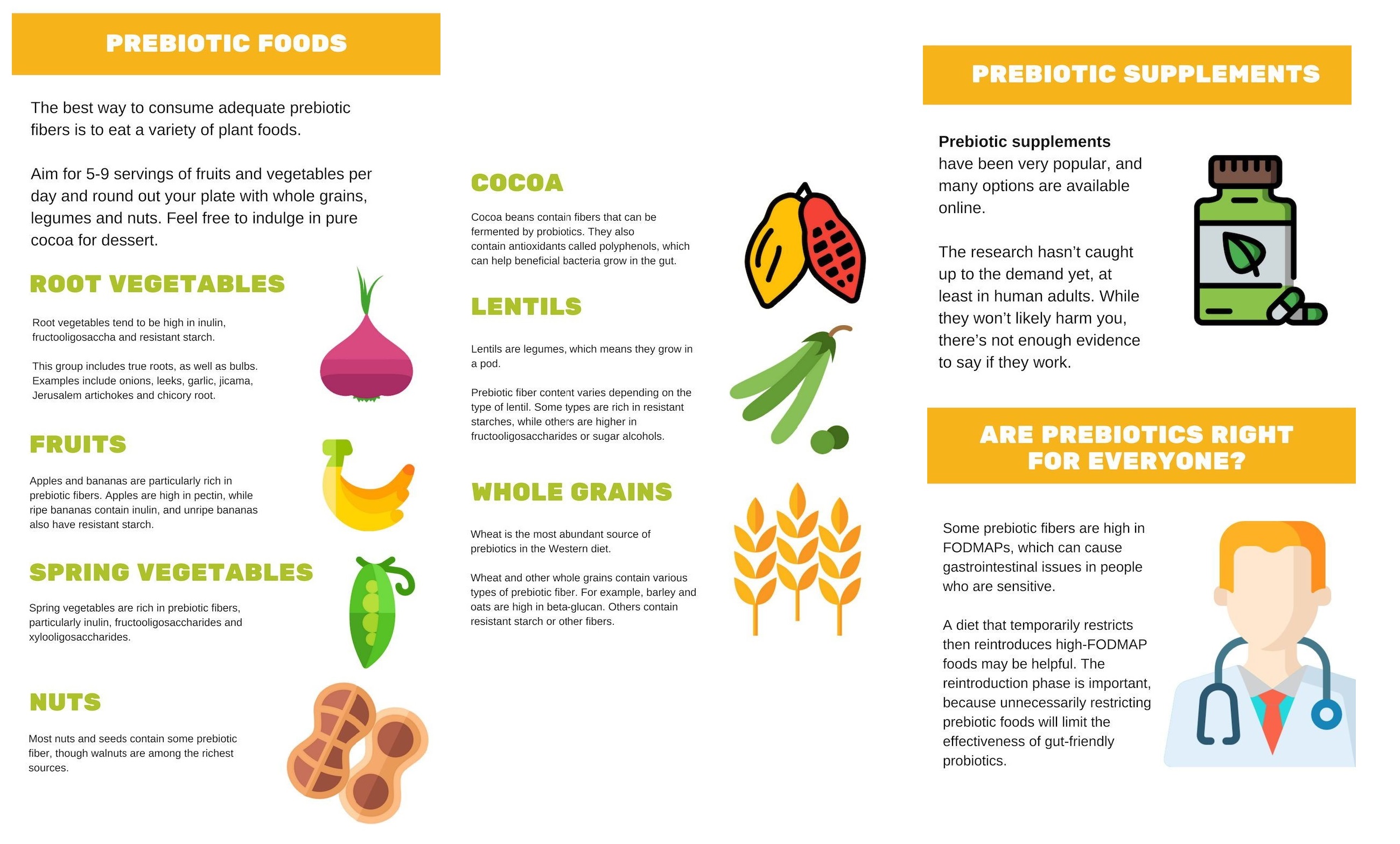 Dietary constituents other than carbohydrates conceivably could function as prebiotics. For instance, cocoa flavonols can increase the relative abundance of Bifidobacterium and Lactobacillus, by selectively suppressing potentially pathogenic bacteria of C. histolyticum group.

Also, it is important to note that because these prebiotics reach colon and only then gets utilized, depending on the type of prebiotics they might get concentrated and utilized in various sections of colon, as shown in the infographic below.

Other than supplementation of prebiotics, either naturally as food or as processed supplementation, they are being utilized as “Synbiotics” in combination with probiotics (live cultured beneficial bacteria). Further, there are many other desirable attributes that can be encompassed into the approach of enhanced prebiotics. Properties like highly selective fermentation, increased persistence through the colon, anti-adhesive properties, attenuation of virulence of pathogens and reduction of gas production etc., have been studied exclusively. Prebiotics are increasingly used in development of new food products, eg. drinks, yogurts, biscuits and table spreads. Even though many of the positive effects of prebiotic consumption are evident, many of these health claims require further research.