Our science has been conceptualized by the combined efforts of experts from the field of medicine, nutrition, life sciences and computational biology, which drive the evidence based analysis and interpretation of your gut microbiome data.

We primarily use the ‘microbiome sequencing analysis for identifying “the diverse microbial species” within your gut, followed by characterization, analysis and interpretation of larger patterns within them. We achieve this through the aid of associations between your data and that of reported evidences, giving you a detailed report on disease risk assessments and general wellness.

BugSpeaks® beyond just the disease risk analysis extends to provide you with personalized dietary and lifestyle recommendations to improve your overall health. We help you understand your body's mental and physical functioning and suggest ways to enhance your health even further and to a fresh start every day. 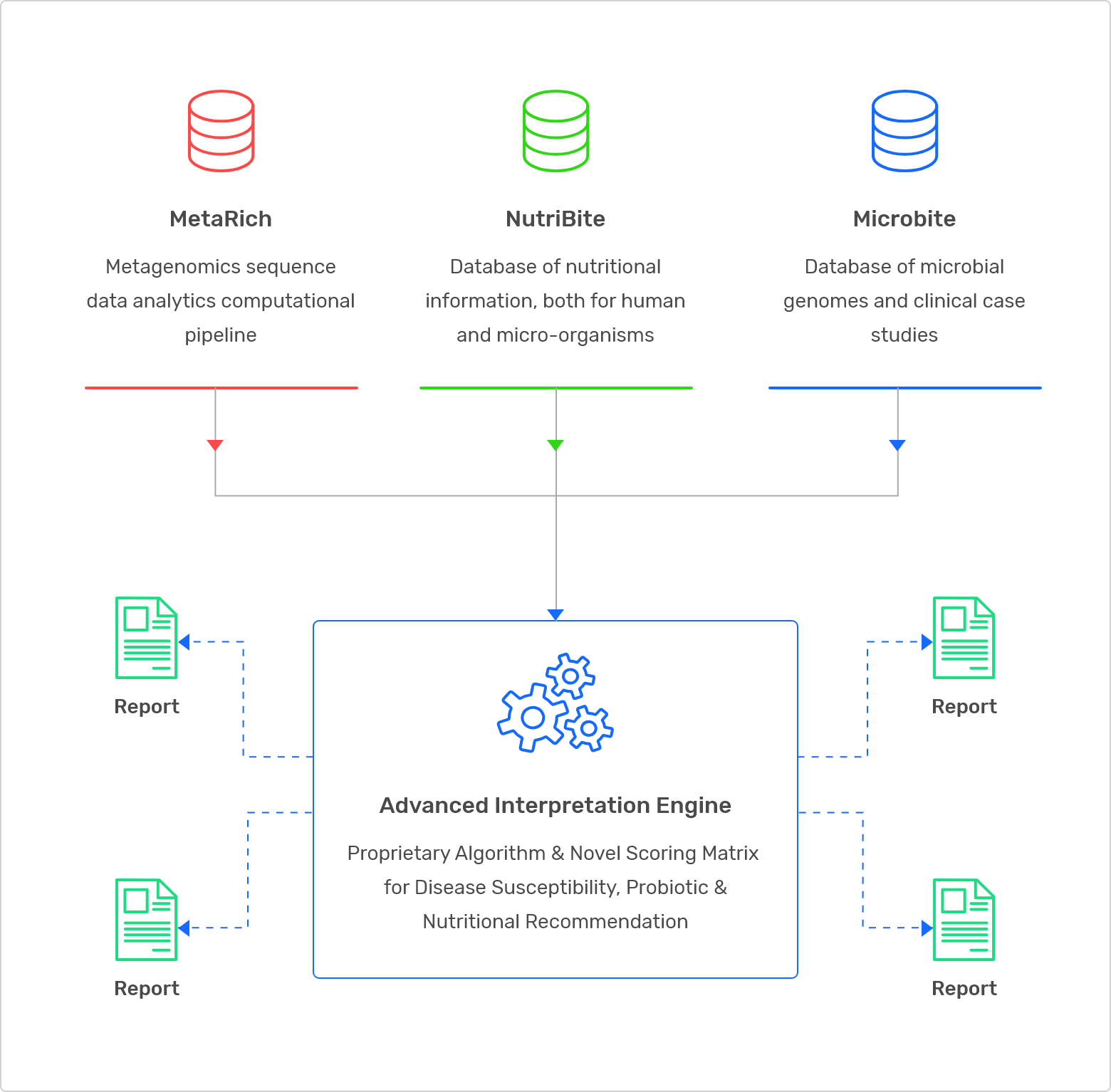 Increased abundance of Enterobacteriaceae (a group of bacteria) activates other enteric pathogens, which together trigger strong inflammation causing irritation of your gut. For instance, sulphate reducing bacteria inflame the lining of the gut, while Clostridium and certain fungi trigger the factors that decrease anti-inflammatory bacteria (like Lactobacillus and Faecalibacterium), cumulatively triggering strong inflammation and inducing Crohn’s disease.

Ulcerative Colitis causes long-lasting inflammation and ulcers (sores) in our digestive tract. Microorganisms like Bifidobacterium and Lactobacillus maintains the gut mucosal integrity through the expression of tight junctions - connections that bridge and hold the cells together. Decreased abundance of these bacteria and other nutritional factors can lead to loss in integrity of the gut leading to Ulcerative Colitis. Hence, a balanced nutrition is vital in the management of ulcerative colitis, along with incorporation of probiotics, which together can aid in reducing symptoms.

Obesity is a complex, multifactorial, and largely preventable disease, outlined quite merely as excess body weight for a specific height. A dysbiosed gut microbiota plays critical role in the development of obesity and obesity-related metabolic diseases. The gut microbiota producing microbial metabolites, like Short-Chain Fatty Acids (SCFAs), can regulate host energy harvest, or modulate signalling pathways of host energy metabolism, which if impaired can lead to obesity.

In this condition, the immune system erroneously sends inflammation signals to your own healthy tissue, in context joints, causing swelling and joint pain. The gut microbiota and their metabolites can regulate immune cells and cytokines via epigenetic modifications. For example, Short-Chain Fatty Acids (SCFAs) produced by gut microbiota promote differentiation of Natural-T-cells into Treg (Regulatory-T) cells. An impaired functioning of this system can result in the erroneous inflammation of joints, leading to Rheumatoid Arthritis.

Inflammatory bowel disease (IBD) is characterised by an exaggerated mucosal immune response to luminal gut contents in genetically susceptible individuals. The abundant bacteria in the gut needs complex polysaccharides to survive, which if absent in your gut, starts eating the mucus layer shielding the colon lining. The degradation of this mucus protective shield leads to infections from many opportunistic infections, aided by Roseburia and Actinobacteria, leading to inflammation of the gut. Because of this inflammation, your body cannot absorb all the nutrients it needs from an impaired digestive system, leading to symptoms of IBD.

Diabetes mellitus is associated with chronic (slow developing) low-grade inflammation, and gut microbes have been shown to significantly contribute to this dysregulation. Lipopolysaccharides (LPS), which are components of the cell walls of Gram-negative bacteria, play a key role in the development of such chronic inflammation, resulting insulin resistance in adipose tissues, muscle cells and liver, eventually leading to Diabetes Mellitus Type 2.

Colorectal adenoma is a small clump of cells that forms on the lining of the colon or large intestine. Most colon adenomas are harmless at first. However, over time, some colon adenomas can turn into colon cancer. Adenomas forms once the genetic material inside the cells lining the colon changes and becomes abnormal. Gut bacteria like Escherichia coli, Bacteroides fragilis, Enterococcus etc., produces toxins that are reported to be involved in the development of cancers.

Clostridium difficile infection, often associated with symptoms ranging from diarrhoea to life threatening inflammation of the colon, is a disease caused by Clostridium difficile, an opportunistic pathogenic bacterium. A healthy gut microbiota plays a central role in preventing CDI by blocking colonization of C. difficile. Dysbiosis of the gut, hence, can result in CDI, which is further aggravated by imbalanced immune response through the loss of immune regulation. Supplementation with probiotics and Faecal Microbiota Transplantation (FMT) with stool of healthy donors have emerged as the best treatment modalities for CDI.

Acute constipation is caused a result of closure/contraction of the intestine. There are two important luminal (gut) factors, modulated by gut microbiota, which are directly associated in constipation. They include Short Chain Fatty Acids (SCFAs) and bile acids, both of which maintain smooth muscle contraction and balanced bowel movements. An impaired gut microbial composition can lead to impaired contraction and imbalanced bowel movements, eventually resulting in constipation.

Depression and anxiety disorders are comorbidities that almost always occur together. The gut microbiota has been associated to have a profound regulatory effect on several neurotransmitter systems, specifically the central serotonergic (serotonin producing) system that regulates mood and behaviour. Hence, dysregulation of gut microbiota has been strongly implicated in depression, anxiety and other mood disorders.

It has been long known that dietary influences have a huge role to play in the development of hypertension, generally known as Blood Pressure (BP). Only recently it has been reported that the gut microbiota has a much bigger role to play, independently and via regulation of diet and nutrition. Gut Microbiota produces unique metabolites like acetate, propionate, hydrogen sulphate, and butyrate, that are potentially important in BP control. Hydrogen sulphate, also produced by certain gut bacteria, can also directly act on blood vessels to modulate blood pressure.

Intestinal infection with pathogenic bacteria results in a transient disruption of the resident gut microbiota which is a risk factor for Irritable Bowel Syndrome (IBS). Dysbiosis in the gut may facilitate the adhesion/attachment of gut pathogens in our gut which are associated strongly with IBS symptoms. Alteration in the composition of the normal microbiota and disturbed colonic fermentation in IBS patients also play an important role in the development of IBS symptoms.

It is usually caused as a result of delivery of undigested protein to the colon, which in turn results in proliferation a set of proteolytic bacteria. These bacteria ferment proteins and amino acids we eat to generate potential uremic (kidney and related) toxins. On the other hand, metabolites secreted by Bifidobacterium infantis (largely beneficial bacteria) results in increase expression of tight junctions, thus harbouring the ability to modify ion permeability and selectivity of the tight junction. Overall, these bacteria and bacterial products could both cause and alleviate the disease.

Gut microbes have a pivotal role in the intra luminal metabolism of bile acids and hence have a significant effect on the digestion and absorption of nutrients. Impaired gut microbiota promotes absorption of monosaccharides (simple sugars) from the gut, thereby triggering increased lipogenesis (production of fat) in liver, hence leading to fatty liver. Along with accelerating lipogenesis, it can also complicate things by suppressing the fasting-induced adipocyte factor, resulting in further accumulation of triglycerides in adipocytes, eventually leading to NAFLD.

Athleticism or Athletic ability is one of the most complex human traits that significantly influences your lifestyle, along with nutrition and diet. Athleticism as a trait does not just limit to body's morphology (i.e., height and body composition), but associates beyond to endurance, strength, power and various other complementary traits. While the genetic makeup of an individual has a large influence on this complex trait, both the scientific and sporting communities have recently acknowledged that the gut microbiota can significantly contribute to athleticism and lifestyle.