You may eat your delicious grains, but should you or should you not, will be revealed how your gut reacts to something key within those grains. What is this key thing you must wonder? Well, it is something that remains common in various food grains and constitutes a major food allergen in the western world. If you have guessed it as gluten, then you are right. But yes, the food you eat and drink, affects your health. Such is the curious case of gluten. For some it’s just an everyday family of proteins that nourish the body, while others suffer from bane of gluten intolerance.

But gluten isn't a single thing, rather it includes a group of hundreds of diverse proteins. So, yes, it is a party of many proteins primarily comprising of, prolamins and glutelins which may or may not cause you trouble. Gluten occurs with starch and accounts for 75–85% of the total wheat protein. It also occurs in many other grains like barley, rye, spelt, oats and triticale and the products derived from them, like, bread and malts. Gluten acts like glue which makes the food chewy, give it elasticity, and helps food-grains to retain their shape. 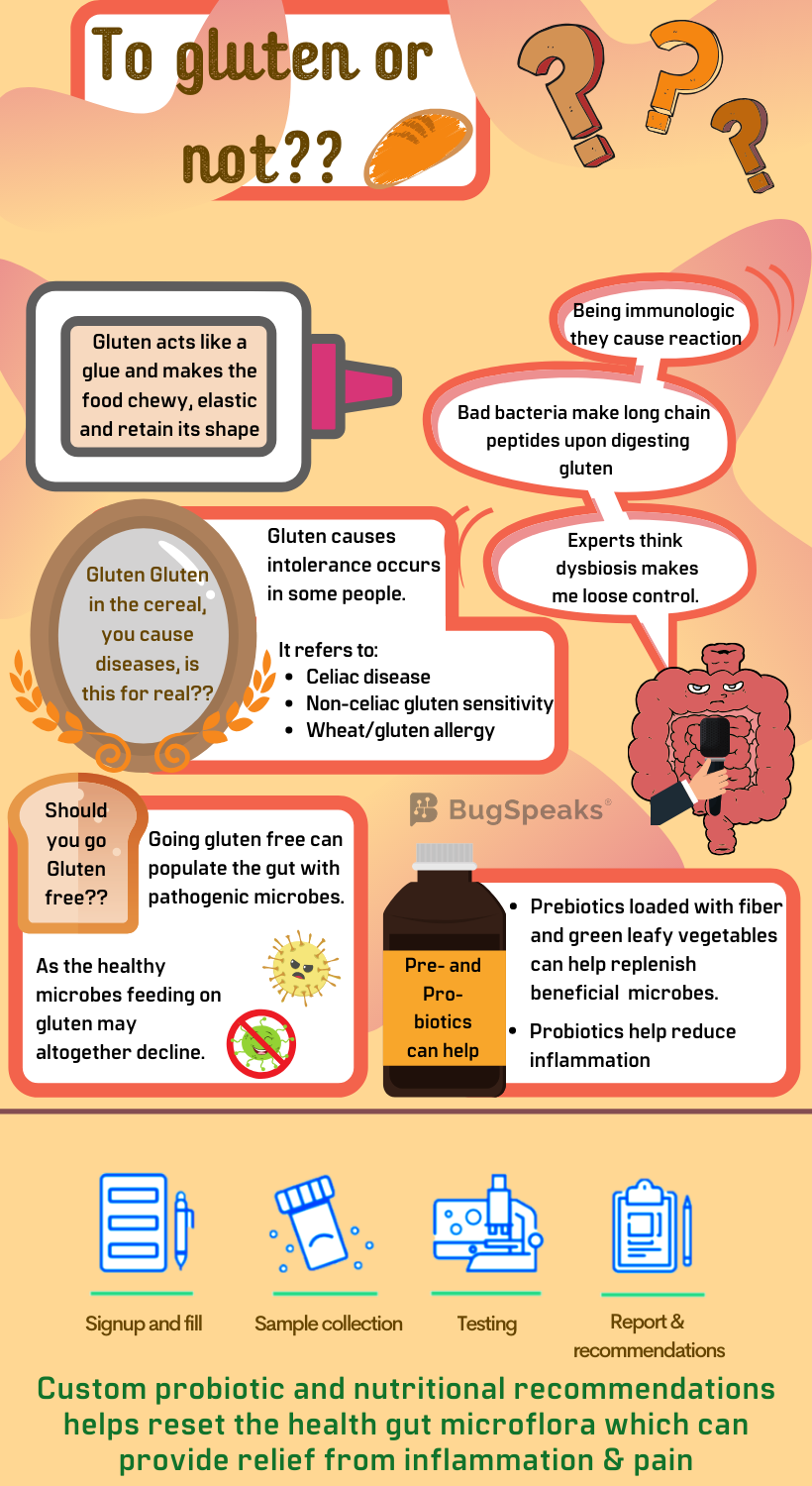 Despite all the delicious gooiness which gluten imparts to food, it can cause some adverse immunological and autoimmune reactions in certain susceptible people. Such a reaction makes up gluten intolerance, which refers to three types of conditions. These include gluten allergy, Celiac disease, and Non-celiac gluten sensitivity. Differentiating between these can rattle one's brains as symptoms may resemble each other. It is essentially a matter of how your gut behaves to the glutens which have dropped down the oesophagus.

A gluten allergy caused due to the consumption of gluten, wheat, or related food products may cause symptoms like mild skin rash, respiratory or gastrointestinal reactions or severe life-threatening symptoms like breathing disability followed by anaphylactic shock. Yet, the actual mechanism causing gluten allergies remains a riddle to be solved.

Another potential form of gluten intolerance, Non-celiac gluten sensitivity (NCGS) is neither true gluten allergy nor exact Celiac Disease. It finds association with symptoms in the gut, brain, muscles, skin or elsewhere in response to the consumption of gluten or gluten-containing food products. However, the villi in small intestines remain healthy. The symptoms generally disappear on a gluten-free diet.

It is interesting to note that all the conditions find association with gut microbial dysbiosis.

What makes gluten confuse the gut?

Experts think dysbiosis as the root cause of gluten intolerance, characterized by an imbalance between beneficial and detrimental bacteria. It has been observed that gluten allergy is associated with reduced numbers of Firmicutes and Bifidobacterium, leading to low levels of butyrate in the gut and increased intestinal permeability. Proteolytic enzymes produced by harmful bacteria like Pseudomonas aeruginosa, Bacteroides fragilis and Proteobacteria generate longer peptide products from gluten. These peptides activate immunologic-cells. Whereas digestive enzymes produced by beneficial bacteria, Lactobacillus produced non-immunogenic smaller peptides from gluten. Several factors like early-life antibiotic treatment can lead to dysbiosis with an expansion of unfriendly Proteobacteria.

Should the gut-land be devoid of gluten?

As gluten is the culprit behind allergies and other conditions, having a gluten-free diet is the easiest solution to reduce the pro-inflammatory signals via the renewal of gut-microbiome. This offers great relief with improvement in digestion, reduction in digestive tract associated problems, and other symptoms related to gluten allergy. Ultimately, this gluten-free lifestyle has an additional benefit, it can help to lose weight. In a gluten-free diet, the healthier options, like quinoa, which doesn't contain gluten replace starches and polysaccharides.

However, the gains come at the cost of losses, as the members of gut-land may suffer when starch intake reduces. As in natural conditions, gluten occurs with starch, a gluten deficient diet significantly brings down the starch intake. It is notable to find that, a switch to a diet that is low or free from gluten, also depletes the comparative abundance of beneficial butyrate-producing, Clostridiales and Lachnospiraceae. Why? Because one simply takes away what these bacteria feed on. Moreover, this may also provide the opportunistic pathogens such as Escherichia coli to proliferate and cause further problems.

Answer lies in Pre- and Pro-biotics

As gluten allergy finds close association with dysbiosis, it is of worth to use pre-biotics or pro-biotics to overpopulate and diversify the gut microbiome. It helps reshape the bacterial community in a more beneficial mode. Such transformed gut flora would help improve gluten tolerance and reduce associated inflammation. Certain healthy gut bacteria like Bifidobacterium longum, Bifidobacterium animalis, and Lactobacillus rhamnosus have been found to diminish the destructive effects of gluten. Prebiotics, like, food loaded with fibre and green leafy vegetables can efficiently replace the pathogens with beneficial ones. Probiotics also help to diminish inflammation and address the fundamental reasons for gluten allergy.

Coming out of gluten allergy

A jump out of the dysbiosis of the gut, back to the health is what your gut-land needs. Currently, a complete cure for gluten allergy is not possible and one might have to endure it for long. But there is nothing to lose hope. As gluten allergy and gut microbiome are interconnected, so, to keep it under control, it is crucial to regulate the gut microbiome. Before regulation in an effective manner, testing proves essential, hence the first step should entail a ‘Gut Microbiome Test’.

The test uses cutting-edge ‘DNA sequencing technology’ to identify the unique collection of gut flora harbouring in patient stool samples. Then a person-specific tailor-made diet plan is formulated based on the unique gut microbial signature.  The signs and symptoms can be kept under control by religiously following a custom well-designed therapeutic plan. Like all other diet-based therapies, it often takes quite some time to get everything resolved. So, patience is the key.