Science now proves the existence of a diverse array of micro-organisms in our gastrointestinal (GI) tract. This variation of gut flora increases through the GI tract from the small intestine to end of the colon. Some bacteria like Firmicutes are predominant in the terminal ileum along with Streptococcus, Veilonella, and Clostridium. The colon is highly populated with Bacteroidetes (genus Bacteroides) and Firmicutes (genus Clostridium, Faecalibacterium, Lactobacillus, Ruminococcus). While only a few Actinobacteria and Proteobacteria reside in the colon. Additionally, some notorious pathogens, like, Salmonella enterica, also comprise 0.1% of total gut microbiota.

Clostridium difficile also belongs to the class of notorious enteric pathogens and resides in the gut of 1-3% of the healthy population. C. difficile a spore-forming, gram-positive, and rod-shaped bacterium belongs to the class of enteric pathogens. Through inflammation of the colon, it can cause mild diarrhoea to possibly fatal pseudomembranous colitis and toxic megacolon disease. C. difficile infection is prevalent in hospitals but may be acquired from the community too.  Being an anaerobe, the vegetative form of bacteria hates environments with oxygen. However, bacterial spores survive in the presence of oxygen, harsh temperatures, acidic environment in the stomach, and alcohol-containing hand sanitizers as well! 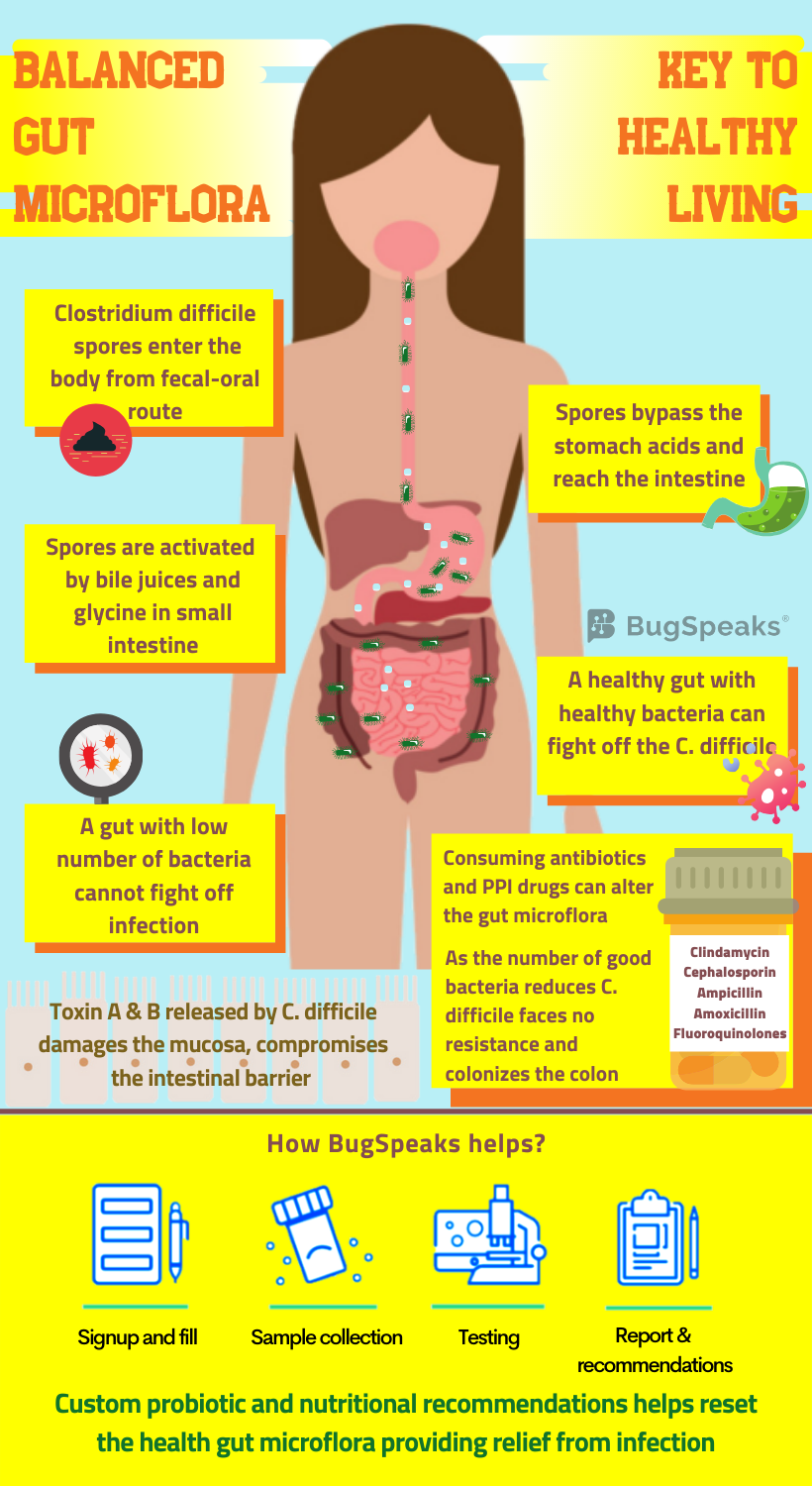 Journey of C. difficile in the gut

These robust C. difficile spores found in soil, faeces, sewage, and other sources thus facilitate disease transmission. C. difficile follows the faecal-oral route of transmission. It spreads either through contact with patients, contaminated objects, or due to poor hygiene. Once the spores enter through the mouth, they survive and pass through the stomach to ultimately reach the small intestine. Bile acids and well-known amino acid, glycine, in the small intestine trigger the germination process, leading to vegetative form. The vegetative form upon reaching the large intestine flourishes in an oxygen-deficient environment. C difficile colonizes on the epithelium of colon and secrete toxins A and B. These toxins induce inflammation of the mucosal layer, destroy the epithelial layer and the intestinal barrier.

The use of antibiotics also increases the risk of C. difficile infection, varying with the type of antibiotic. C. difficile infection finds no association with tetracyclines, while penicillin poses intermediate risk. The fluoroquinolones, third generation cephalosporins, and clindamycin, on the other hand, pose an elevated risk. Using clindamycin poses the maximum risk of C. difficile infection. Taking antibiotics even for a few days disturbs the gut flora. While frequent uptake can lead to a profound and long-lasting damage. Known as “post-antibiotic dysbiosis”, such impairment includes loss of diversity and change in the metabolism of the microbiota.

This altered microbiota exhibits reduced colonization resistance against invading pathogens. The number and variety of dominant Bacteroides and Firmicutes drop in association with an overgrowth of Enterobacteriaceae. Antibiotic consumption reduces the ability of Bifidobacteriaceae to produce acetate. Acetate helps protect the epithelial layer of the colon from infection. As the micro-organisms in our gut work hand in hand, the antibiotic usage effects translate far beyond the immediate targets. The loss of one class of bacteria might indirectly hinder the growth and survival of others through mechanisms yet unknown. Consequently, the cumulative outcome of post-antibiotic dysbiosis causes the interruption of colonization resistance against C. difficile.

Another medication which relieves you of heartburn, ulcers and acid problem in stomach favours C. difficile unintentionally. Known as Proton pump inhibitors (PPIs), these medications work by lowering the gastric acid production in the stomach. As the acid reduces, the environment of gut changes, and so does the variety of gut microbiota. Chronic use of PPIs shows a reduction in commensal bacteria, Bacteroidetes and an increase in Firmicutes, enhancing the risk of C. difficile infection. Other exogenous factors, such as the use of histamine receptors, two blockers, prior hospitalization, and nasogastric tube placement, also find an association with increased risk of C. difficile infection.

Some host-related risk factors like the severity of underlying illness, any recent abdominal surgery, aging, and others also influence C. difficile infection. Our gut flora gradually alters with age. Evidence shows that the chance of C. difficile infection increases with approximately 2% for every additional year of age after the age of 18.  In the elderly, the gut microbiota shows the high population of Bacteroides spp. and Clostridium groups. However, a noticeable drop in microbial diversity occurs in C. difficile infected patients when compared with a healthy individual of the same age group.

Normal and healthy gut microbiota plays a vital role in preventing C. difficile infection by offering colonization resistance against the pathogen. Interruption in gut flora composition is profound in patients with recurrent C. difficile infection, particularly those who have received numerous courses of antibiotics. Thus, to prevent C. difficile infection, the first and foremost target should be to restore and renew the healthy and beneficial intestinal flora. Another option is to eliminate or at least try to reduce the associated risk factors through the management and manipulation of gut flora back to normal.

Thus, to assess the risk of C. difficile infection, all you need to do is to take a ‘Gut Microbiome Test.’ This test uses the cutting-edge DNA sequencing technology and advanced bioinformatics algorithms in a patient faecal sample to map the wide variety of micro-organisms present in the gut. The individual micro-organisms are identified by analysing the massive database of information. Prebiotics, probiotics and custom dietary recommendation prescribed on the basis of results help restore the gut flora back to health.