Gut Microbes: You grow - They Grow

We change with age, our habits, our body, our preferences, and a lot of other changes as we grow. So, when everything in our body changes as we age, how can the gut microbes not evolve? Yes, the millions of microbes have been growing and changing with you continuously, helping in healthy existence at every stage of life. The story of gut microbes begins since our inception in the mother’s womb. It is the embryo stage where the microbial colonization of the gut starts. Different ways of in-utero exposure to microbes involve placenta, amniotic fluid, blood from the umbilical cord, semen, and maternal gut microflora. The colonization is indicated through similarity in microbial signatures between the amniotic fluid, placenta, and first stool of infant (meconium). 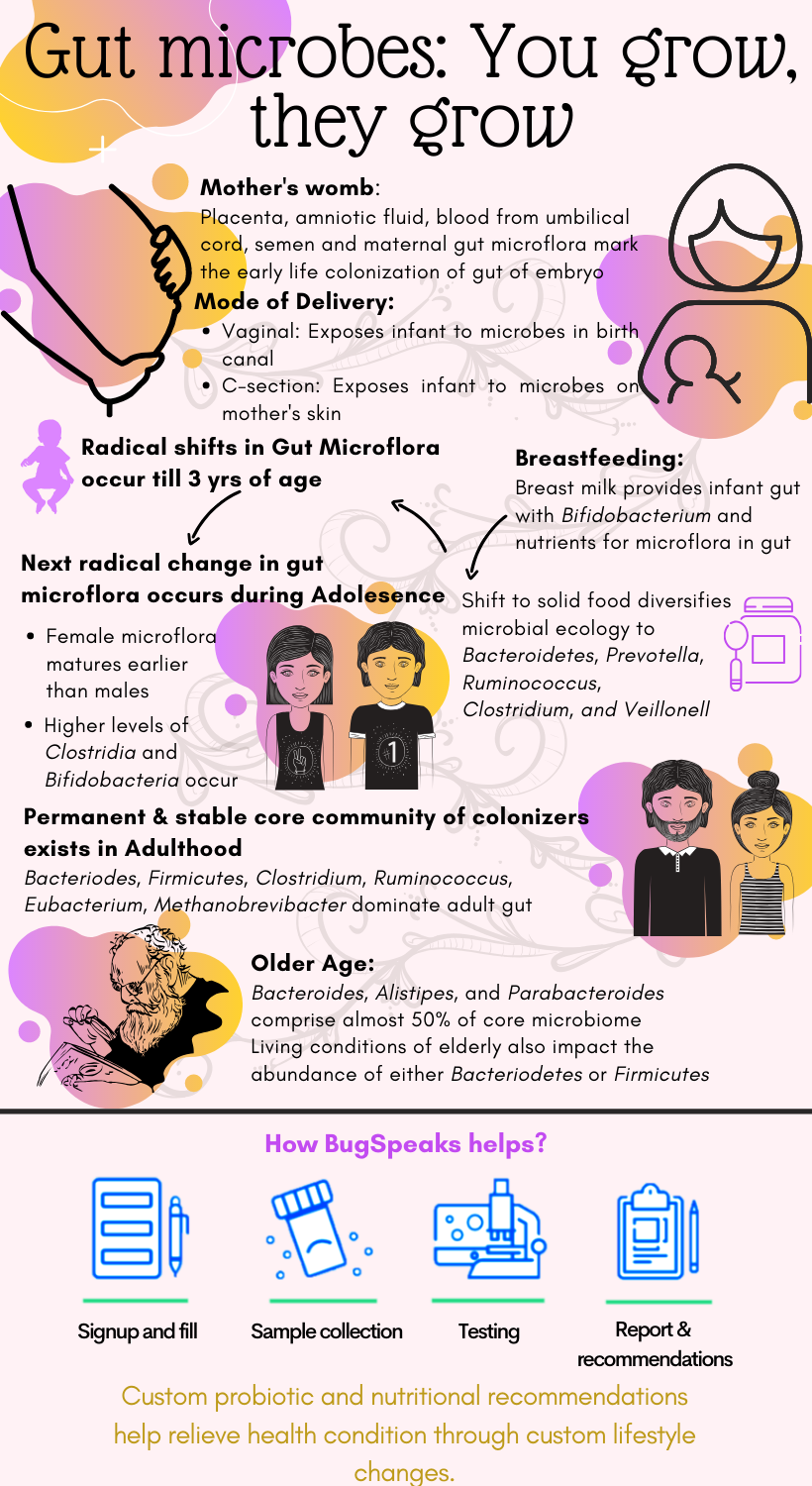 As we complete 9-months of gestation in the mother’s womb, the brain releases oxytocin, and childbirth begins. Childbirth marks the second event of microbial transmission. The nature of delivery, whether vaginal birth or a caesarean section, determines the type of microflora encountered by the infant. Vaginal delivery exposes the newborn to a range of microbes, such as Enterobacteriaceae, Lactobacillus, Prevotella, which are present throughout the birth canal to the vaginal opening. A caesarean section, on the other hand, limits this interaction for the child and diminishes the diversity of microbial ecology. The microbes encountered during the caesarean section include Bifidobacteria, Bacteroides, Staphylococcus, Propionibacterium, and others. They are unique to the maternal epithelial cells’ representative of the interaction with maternal skin alone.

Further evolution of colonizing microbes depends on the interactions governed by early life events such as health status and childcare techniques employed by the parents. Breastfeeding is an essential part of ensuring immunity to the baby through antibodies present in breast milk. Besides immunity, it also serves as a critical source of microflora, such as Bifidobacterium. Moreover, it has also been found to provide nutrients for the microflora population in the infant’s gut through human milk oligosaccharides (HMOs). New-borns have a gut microflora composed mainly of Enterobacteriaceae and Staphylococcus, which later attains Bifidobacterium and Lactobacillus. Feeding formula to the infant, on the other hand, can alter the gut microflora at the initial stage of development, resulting in a microbial community with low biomass.

As the infant grows further in age, the shift to solid food, dietary supplements, and weaning from breast milk brings in a new wave of microbes such as Bacteroidetes, Prevotella, Ruminococcus, Clostridium, and Veillonell. The microflora ecology keeps diversifying with age as the number of food sources intensifies, and environmental interactions increase. Notably, the dominance of Bifidobacteria diminishes as solid food is introduced, as the bacteria majorly processes the milk oligosaccharides. Such radical shifts of the microbial taxonomies continue up to 3 years of age as significant alterations in diet occur.

The next stage of radical change in growth and development occurs at puberty. Significant hormonal changes drive the adolescent towards adulthood and sexual maturity with gender-specific modifications. Consequently, the microbial shifts also occur in a gender-specific manner, with women’s gut microflora maturing earlier than men. Also, with an increase in age, the population of anaerobes increases where that of aerobes and facultative anaerobes decreases. The adolescent microbiome presents higher levels of Clostridia and Bifidobacteria compared to adults and expresses genes related to growth and development.

Following growth and development in adolescence, the adult microbiome transforms to express genes associated with obesity and inflammation. In adulthood, a permanent, stable core community of colonizers exists. It works towards maintaining balance in the body and stable microbial configuration under conditions of duress. As the surface area of gut reaches a peak in the adult, the complexity of gut microbiome increases, which gradually expands to distinct niches in the gut. During pregnancy, the gut microflora also gets altered with an increase in abundance of Actinobacteria and Proteobacteria. The adult microbiome is susceptible to environmental distresses such as seasonal variation, temperature changes, or exposure to antibiotics.

Antibiotics affect the microflora composition; they promote the growth of proteobacteria and reduce the growth of actinobacteria and influence antibiotic resistance. For the later year of life, food and lifestyle have a significant impact on gut microflora. Adult gut microflora consists of Bacteroides, Firmicutes, Clostridium, Ruminococcus, Eubacterium, Methanobrevibacter populations. With advanced age, the microflora ecology consists of Faecalibacterium, Ruminococcus, and Roseburia, which are mostly obligate and facultative anaerobes.

Ultimately, in the elder age, the significant variations in the gut microbiome constitution also appear. For example, Bacteroides, Alistipes, and Parabacteroides comprise almost 50% of the core microbiome in the elderly. Also, the maximum fluctuations occur between Faecalibacterium, Ruminococcus, and Clostridium IV & XIVa clusters. Even the living conditions of the elderly have also been indicated to influence the gut microbiome. For example, elderly living in long-term residential care presents a high proportion of Bacteriodetes such as Coprococcus and Roseburia. While those living in community dwellings show a high proportion of Firmicutes such as Coprobacillus, Anaerotruncus, Parabacteroides, Lactonifactor, and Eubacterium.

What does your gut speak to you?

Thus, microflora composition plays a role in the predisposition of an individual to conditions like immune disorders, obesity, allergies, diabetes, neurological disorders, infections, metabolic diseases, and colorectal cancer at different stages of life. In light of the critical role the gut microflora plays in the healthy existence, scientists continue to harbour this knowledge to study the role of the microflora ecology and composition in finding ways to ensure a healthy body. The advancements in DNA sequencing technology allowed the generation of the catalogue of the unique microflora that inherits a host and deduces its role in the health status.

And, that’s why we developed BugSpeaks®. To guide you in healthy ways customized as per your life stage and microflora Bug Speaks test with the help of cutting edge, ‘DNA sequencing technology’ identifies the array of your unique gut microbiome mapped from your faeces sample. The resulting customized results and dietary recommendations allow us to help you propagate healthy gut flora in accordance with your life stage and longevity.