The gut microbiome have a role in dementia

Dementia, as a comprehensive type of brain disease is known to upset an individual’s daily activities. The disease is characterized by the deteriorated memory, thinking ability, behavior and the capability to carry out everyday functions. Globally, ~47.5 million individuals are affected and the prevalence of dementia is increasing continuously. Dementia leads to disability and dependency amongst the aged people, and thus has a colossal physical, mental, societal and economic effect on families, caregivers, and the general public. The common form of dementia is the Alzheimer’s disease, which account to about 60-70% of the cases followed by other forms, such as Lewy body dementia, vascular dementia, frontotemporal dementia, and Parkinson’s disease with dementia.

Recent research advancements have deciphered the role of gut microbiome and its composition associated with the gut permeability and inflammation in dementia patients. Also, it is hypothesized that dysbiosis (an impaired microbiota) may augment the gut permeability, microbial translocation and trigger an inflammatory-immune response, which may perhaps encourage pathogenesis and progression of dementia.  In this regard, a novel approach is suggested for the management of these health disorders, and as an adjuvant for psychiatric treatment of neurological disorders, including dementia and other interrelated diseases via modulating the microbiota composition (e.g., with the use of probiotics).

The expansion of advanced high-throughput analytical techniques including next generation sequencing has disclosed the possible role of the commensal microbial population, particularly the gut microbiome in several human diseases. Lately, the theory of the gut brain-axis has been well-established. Accordingly, a communication exists between the gut and brain site to control and mediate the process of many biological pathways involving the autonomic and enteric nervous system, the neuroendocrine system and the immune system. However, any deviations in such communication due to dysbiosis may involve in disease development. For example, the enteric microbiota i.e., Bifidobacterium and Escherichia, which are considered as both commensal and pathogenic microbes are identified to have interactions between the brain and gut axis.

The gut microbiota supports numerous daily activities of the brain, comprising the regulation of the hypothalamic-pituitary-adrenal (HPA) axis activation state. The HPA axis activation releases cortisol, which in turn manage the triggering of microglia of the brain, and influence to release cytokines. This action rule the functions of the central nervous system through various communications, including vagal nerve and adrenergic nerve activation in addition to the secretion of many molecular candidates (endocrine hormones, neuropeptides, neurotransmitters, and immunomodulators). The stress hormones of hosts, for example noradrenaline might affect signalling between bacteria or their activities in the gut and lead to changes in the microbial diversity and overall functions of the gut microbiota. Nevertheless, these gut bacteria synthesize and release many neurotransmitters and neuromodulators, and induce the synthesis as well as the release of neuropeptides from enteroendocrine cells. For instance: the species of Bifidobacterium and Lactobacillus produce short-chain fatty acids;  spore-forming bacteria produce 5-HT; Bacillus, Escherichia and Saccharomyces spp. secrete norepinephrine; Bacillus and Lactobacillus spp. produce dopamine and acetylcholine, respectively. In specific, recent findings have suggested that microglia maturation and function is governed by the short-chain fatty acids produced by the gut microbiota, and hence highlighted on the possible usefulness of the gut microbiome as an impending diagnostic target in dementia and its cure.

The gut microbiota regulates neuro-inflammations and the HPA axis activity, and might lead to Alzheimer’s disease. The neuropathological features of Alzheimer’s disease are the two pathologic protein aggregates, namely amyloid beta (Aβ) plaques and hyper-phosphorylated tangles of tau-protein, which cause neuro-inflammation, mainly facilitated by the innate immune system. This process mainly includes microglia cells that represent the resident macrophages of the brain. Though microglia cells can remove extracellular Aβ aggregates, in later phases of the disease, cells remain in a dystrophic state and fail to exert their positive actions. In addition, the inflammation and the pathogens (e.g., bacteria: Salmonella enterica; fungi: Candida albicans; viruses: herpes simplex virus; and parasites: Toxoplasma gondii) interactions can also lead to the development of Alzheimer’s disease. Thus, a strong gut microbiota may pay a significant role in preventing general infections by restricting pathogen growth, improving the microbial barriers, and enhancing the immune response. The representation of a few key factors in the Alzheimer’s disease pathogenesis is given in the figure-1. 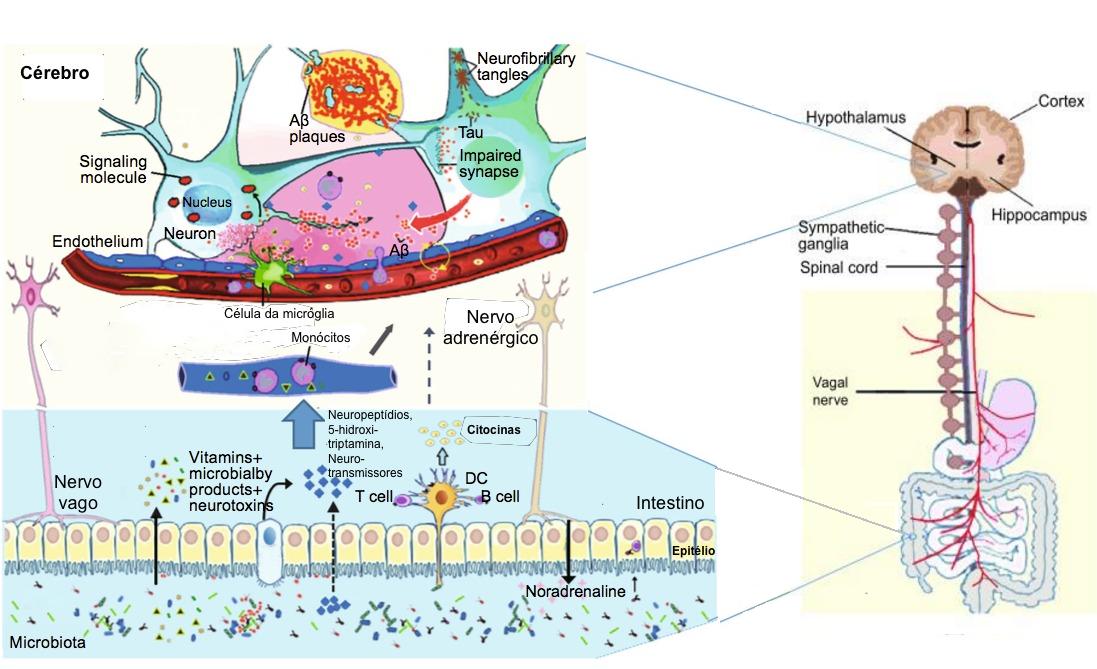 Figure -1: Schematic of some key players in the pathogenesis of AD. The gut microbiota regulation of neuro-inflammation and the hypothalamic–pituitary–adrenal (HPA) axis activity and may lead to AD. The bacterial products that gain access to the brain through the bloodstream and the area postrema, via cytokine release from mucosal immune cells, through the release of gut hormones such as 5-HT from EEC cells, or via afferent neural pathways, including the vagal nerve. NP: Neuropeptide; NT: Neurotransmitter; 5-HT: 5-hydroxytryptamine; DC: Dendritic cell; EEC: Enteroendocrine cell; Aβ: amyloid beta protein; AD: Alzheimer’s disease.

In the course of ageing, the gut microbiome composition undergoes fluctuations. In aged people, decreased microbial diversity with a loss of helpful taxa and increased facultative pathogens have been observed. Further, aging is connected with inflammation, which is also represented as inflammaging, which is linked with the accelerated gut permeability, mucosal inflammation and bacterial translocation. As aging is one of the chief risk factors of dementia, it is expected that the gut-brain axis is disapprovingly involved in the development of dementia. Considering this, a precise diet and the surrounding environment play a vital role in shaping the good microbiome composition and help in controlling many metabolic disorders. Some of the animal investigations have suggested that dementia is associated with fluctuations in the gut microbiome composition.

Studies have clearly indicated the positive link between the gut microbiome composition and the neuropathology of dementia. However, more investigations on the gut microflora is required to enable additional novel vision into the biology of dementia. This will facilitate in the development of novel therapeutic strategies for dementia. As stated in a review by Alkasir et al. (2017), the modulation of gut microbiota (by probiotics or other dietary intervention) or direct targeting of gut microbiota enzymes (by pharmacological inhibitors or activators) may be a growing area for pharmaceutical and functional food industries, with the goal of decreasing the widespread growth of adiposity, insulin resistance, Alzheimer’s disease, and other metabolic diseases.