Studies suggest the relationship between the gut microbiome and allergic diseases

The past few years have witnessed the increased cases of patients suffering from allergies and inflammatory diseases. Scientific explorations have suggested the existence of the relationship between the gut microbiome and allergic diseases. The gut microbiome produces both beneficial and damaging metabolites from the diet. Along with bacterial components, these metabolites modulate the host immunity, and significant influence on the occurrence of allergic illnesses.

The human gut harbors several trillions of commensal microorganisms, mainly the bacterial population with more than thousands of species. This collection of microbes is generally represented as the gut microbiome. Due to obvious reasons, culture-based analysis of microbiome diversity is replaced by the recent advanced high-throughput DNA sequencing approaches, such as the bacterial 16S ribosomal RNA sequencing and microbiomics. These approaches enable the correct documentation of commensal bacteria directly without requiring to culture. Such studies have evidenced that alteration in the gut microflora composition or declined diversity, also known as dysbiosis state may lead to the development of intestinal inflammations and subsequently cause allergic conditions. For example, in a study comprising patients having food allergies in the United States has revealed the occurrence of reduced microbial diversity in the gut, and found an increased number of bacterial species belonging to Bacteroidales, while Clostridiales were found in low numbers. Further, some gut bacteria produce useful metabolites using the host's diet, and they directly take part in the mediation of host’s immune responses. Researchers have highlighted the role of commensal gut bacteria and their metabolites in regulating host immune responses and allergic diseases.

Long-chain fatty acids (LCFAs), such as ω3 and ω6 fatty acids function as energy sources and take part in the immune responses. However, mammals cannot produce LCFAs, and interestingly they are produced by the gut microbes using dietary components. Further, it is suggested that ω3 fatty acids have anti-inflammatory and anti-allergic properties (Miyata and Arita 2015). The gut commensal bacteria, mainly lactic acid bacteria (e.g., Lactobacillus plantarum) are reported to produce ω6 fatty acid-derived lipid metabolites (linoleic acids, oxo and hydroxy fatty acids). Likewise, 17,18-epoxy-eicosatetraenoic acid, an anti-allergic lipid metabolite is speculated to be produced in the colon via cytochrome P450 function. However, evidences have suggested the role of commensal bacteria in LCFAs metabolism. In a study, germ-free animals were shown to produce high levels of colonic lipid metabolites, such as 17-hydroxy docosahexaenoic acid, 14-hydroxy docosahexaenoic acid, resolvin D1, and protectin D1 when compared to conventional mice. Resolvin D1 is known to down-regulate the expression of interleukin-1β (IL-1β) during microbial infections. Further, IL-1β intensifies allergic reactions to cause asthma, atopic eczema, and dermatitis. Also, it is suggested that microbe-dependent inhibition of resolvin D1 production is linked to allergic inflammations (Hirata and Kunisawa 2017). Experimental evidences suggest that 10-hydroxy-cis-12-octadecenoic acid produced by Lactobacillus spp. may prevent the progress of food allergies, which is mediated by maintaining intestinal epithelial barrier function. Figure 1 illustrates the role of bacterial metabolites in the gut towards regulating immunity for the allergic diseases. 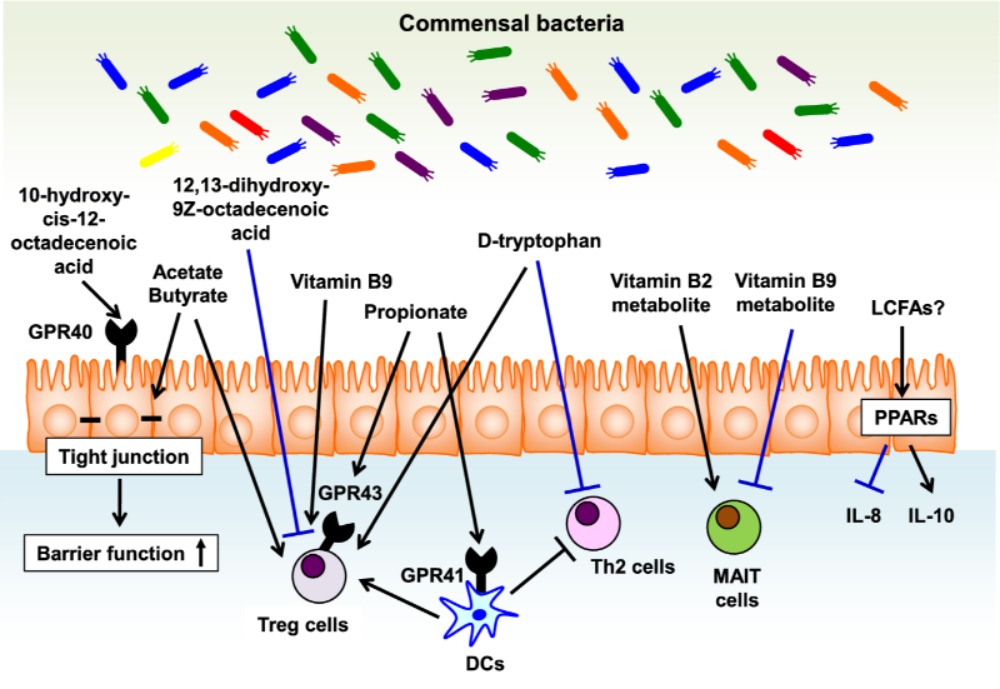 Figure-1: Bacterial metabolites in the gut regulate immune responses for the allergic diseases. Bacterial metabolites regulate versatile biologic and immunologic functions related to allergic diseases. Epithelial barrier function is enhanced by 10-hydroxy-cis-12-octadecenoic acid, a linoleic acid-derived metabolite, and SCFAs such acetate and butylate, fermentation products by some bacteria. In addition, SCFAs (e.g., acetate, butyrate, and propionate) as well as D-type tryptophan have a potential to enhance the induction of Treg cells. Vitamin B9 plays a key role in the maintenance of Treg cells and its metabolite prevents the activation of MAIT cells by competing with vitamin B2 metabolite, MAIT cell activating ligand, in their binding to MR1. PPAR ligands such as LCFAs decrease the inflammatory cytokines such as IL-8 and induce the production of anti-inflammatory cytokines such as IL-10. (Source: Hirata and Kunisawa 2017; https://doi.org/10.1016/j.alit.2017.06.008)

In a recent cohort study, the association amongst the gut microbiome, their lipids, and allergic diseases in humans was established. It was observed that the composition of the gut microbiota plays a significant role in the development of atopy and asthma in childhood. 16S rRNA sequencing analysis evidenced that high risk for the development of allergy in neonates is due to the reduced abundance of gut bacterial species, such as Bifidobacterium, Akkermansia and Faecalibacterium and increased abundance of fungi, such as Candida and Rhodotorula.  Interestingly, the low-risk subjects were observed to have increased levels of anti-inflammatory lipid metabolites (docosapentaenoate and dihomo-γ-linolenate). On the other hand, high-risk groups were shown with enhanced levels of pro-inflammatory metabolites, such as 12,13-dihydroxy-9Z-octadecenoic acid, stigmasterol and sitosterol, and 8-hydoxyoctanoate (Fujimura et al. 2016). LPSAs are reported to modulate immune reactions via the peroxisome proliferator-activated receptor (PPAR) family, i.e., the most common negative regulators for allergic conditions. As stated by Hirata and Kunisawa (2017), Bacteroides thetaiotaomicron stimulates PPAR-γ-dependent export of NF-κB from the nucleus, and subsequently it decreases NF-κB-dependent IL-8 production to curb the IL-8-intermediated infiltration of granulocytes in bronchial allergy.

Overall, commensal gut bacteria produce many useful metabolites that are involved in regulating allergic responses mediated via various ways, such as the induction of Treg cells, up-regulation of IL-10 expression, suppression of the Th2-type phenotype and maintenance of the gut barrier function. Also, they are known to produce pro-inflammatory metabolites. There are many factors that are involved in the regulation of immune response and allergic diseases. Hence, having a right balance between diet and the gut microbiome may certainly benefit in overcoming allergic diseases. However, more research is highly recommended in this regard to clearly understand about the mechanisms involved and to disclose various cross-talk between commensal microbes in the gut and host immune system.