The last decade has witnessed a major surge in interest in the field of microbiology, which in turn has instilled a huge perceptional change into the field of oncology (study of cancers).

The surge in interest in the field of microbiology is due to the gut "commensals", the symbiotic microorganisms living with us. They have gained traction in the past decade for both their beneficial and detrimental influence on us, and significant impact on our health and wellbeing. This in turn has influenced a change in perception about cancers, both in its understanding and how to treat them. Even though, years of adopting molecular biology techniques, next-generation sequencing (NGS) technologies, whole genome sequencing and then multi-omics approach have aided us to understand cancer better than ever, the human microbiome and its influence on cancers have introduced a new paradigm to this understanding.

The link between microbiome and 'trigger, development & progress of cancer', and more recently even its treatment, has been well established. These established correlations indicate that the microbiome and cancer affect each other in a “bidirectional and cyclical manner”. On one end the cancer development changes microbiome composition while such changes also contribute to cancer progression in return, and this process continues in a cyclical manner. Furthermore, it’s also been established that the effect of microbiomes on cancers can both be detrimental (increase the pathogenesis of cancer and more) or beneficial (being protective against the triggers of cancer and more).

Microbiome and Cancer trigger and progression

Factors like gene mutations, family's genetic history, lifestyle habits (like smoking and alcohol consumption) etc., have long been studies and addressed with respect to cancers. Recently, there has been a rise in evidences associating involvement of microbiome (more specifically gut microbiome) in cancer. Initial studies revealed significant differences in the relative abundance of specific microbes in cancer cases compared with control subjects, which triggered a tirade of conversations and debates. Later, well-known associations between gut microbiota and inflammation & metabolism also got converged with its influence on cancer, expanding our understanding of contribution of microbiome in human cancer. 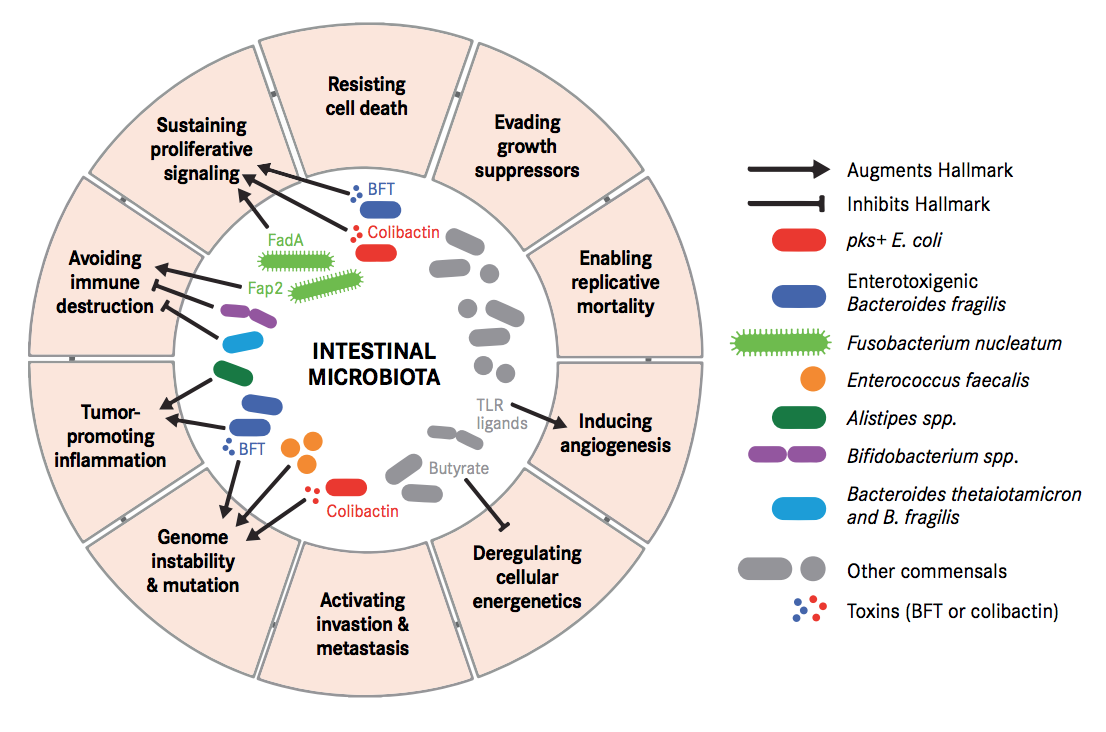 Carcinogenesis is a process where tightly regulated systems of our body, such as immune activity and cellular metabolism, go off the track. Either some perturbations in the microbiome or presence/absence of some specific microbial species/component or both can lead to such changes in cellular control.

These perturbations have been demonstrated to destabilize DNA integrity, deregulate signal transduction, modulate cell proliferation and even promote pro-tumorigenic (cancer inducing) immune responses. Some bacterial toxins can trigger senescent cells (cells that have stopped dividing) into proliferating cells by secreting growth factors. Specific microbial changes and its components have also been demonstrated to block tumour-killing capabilities of immune cells, enabling tumour progression and persistence even further. 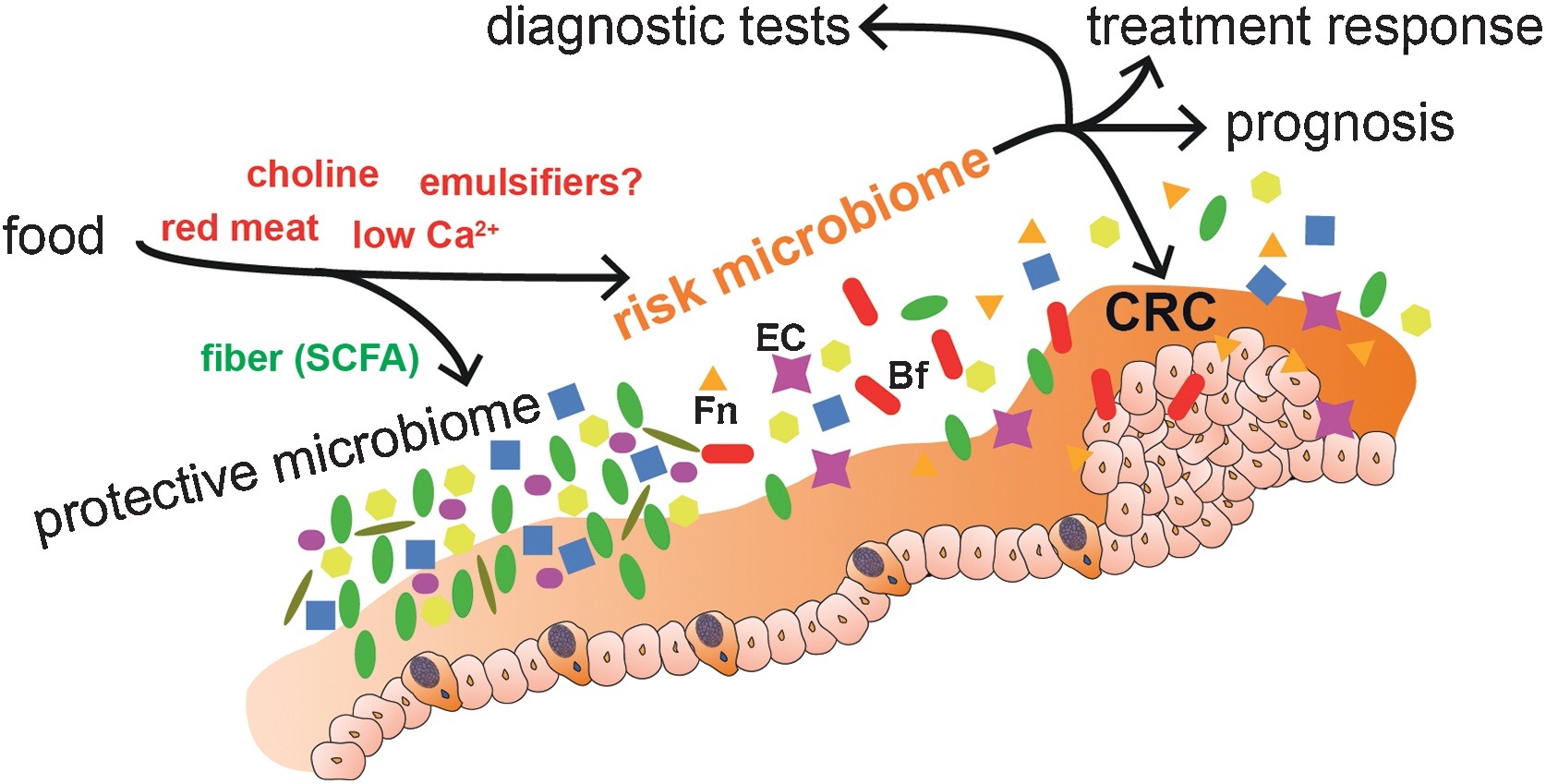 Even though such activities have associated the role of microbiome with tumour development and have underlined several possible functional links, it is still under debate if microbiome alterations can cause cancer or if they are merely associated with the disease. But it has become critical to combine knowledge from tumour-microbe-immune interactions with that of genomic, nutritional, pharmacological, social and behavioural effects of these interactions, for discovering and inventing next class of cancer treatments.

Of all the cancers, human colorectal cancer (CRC) has been the one studied most, with maximum number of clinical studies and demonstrated associations between gut microbiota dysbiosis and the cancer. Specific bacterial species and strains have been associated with CRC, indicating inter-related links between gut microbiota, nutrition, immunity, tumour evolution and even tumour immunotherapy. 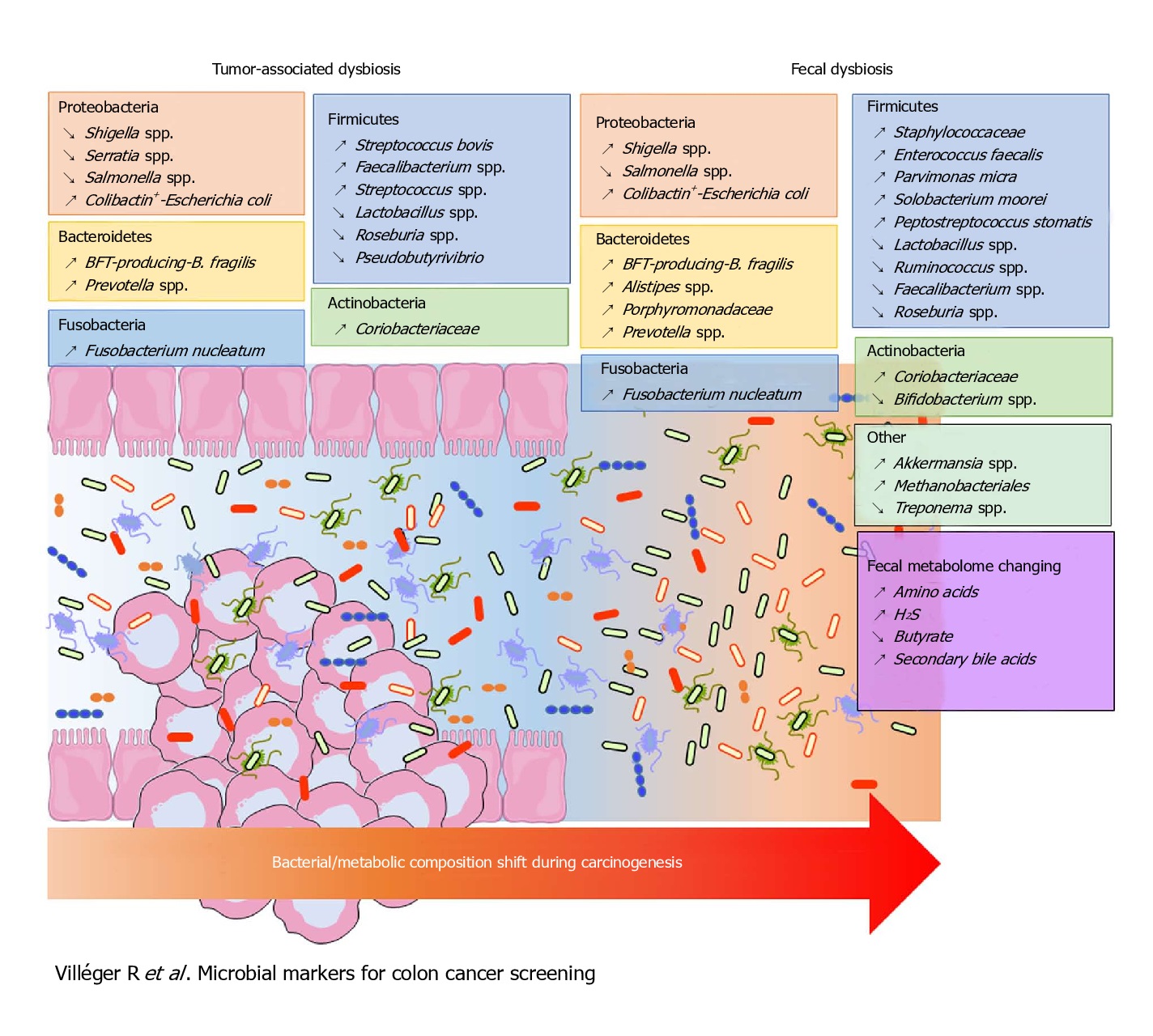 F. nucleatum represents the best studied bacterium with a clear association with CRC. F. nucleatum has been consistently found more abundant in faces from CRC patients, while its lower abundance has been associated with overall longer survival time. Even patients with simple adenomas exhibit an increased prevalence of F. nucleatum in colonic tissue, while its persistence in metastatic colorectal tumour has been recorded.

Immunologically speaking, its abundance is inversely associated with CD3+ cell density in tumour, associated with serrated neoplasia pathway, increased expression both in high-grade dysplasia and established CRC. It may suppress the adaptive T cell response and may function in a way like the immune checkpoint in CRC. Quantitative PCR abundance of two gene markers (butyryl-CoA dehydrogenase from F. nucleatum) clearly separated the CRC microbiome form healthy controls. It is also been abundantly present with recurrence after chemotherapy and is known to promote resistance to chemotherapy.

Escherichia Coli has the potential to cause intestinal inflammation via toxins such as colibactin, which also has oncogenic potential. This has been supported by various metagenomic studies in large CRC patient populations. Experiments in mice have demonstrated that host inflammation is essential for the cancer-promoting potential of E. coli. Mucosa-associated E. coli is significantly more prevalent in CRC tissue, correlates with tumour stage and prognosis. Colibactin-expressing E. coli is known to enhance tumour, accompanied by production of hepatocyte growth factor, overrepresented polyketide synthase pathogenicity island. Western diet affects enhances susceptibility towards the pathogenic potential of adherent invasive E. coli.

Bacteroides fragilis is yet another human commensal found in the intestine of most humans. Bacteroides fragilis-derived toxin (BFT) causes inflammatory diarrhoea and inflammation-related cancer. B. fragilis toxin stimulates intestinal epithelial cell shedding and gammasecretase-dependent E-cadherin cleavage. Enterotoxigenic Bacteroides fragilis (ETBF) induces colitis and colonic tumours in mice by secreting BFT. Dominated by inflammatory T cells and neutralization of IL-17 and IL-23 reduced inflammation and tumour formation. B. fragilis colonization was paralleled by increased expression of TNF-gamma, ß-catenin, NF-kB, COX-2 and MMP9. Together with F. nucleatum and E. Coli, B. fragilis was more abundant in worse prognosis groups of CRC.

Klebsiella pneumoniae may play a role in development of colorectal cancer. High prevalence in isolates from patients suffering from gastrointestinal diseases and CRC. Action through colibactin toxin and DNA strand breaks. Continuous insult of the colibactin toxin supplemented with the influx of pro-inflammatory cytokines. Colonic microenvironment leads to chronic inflammation. Repeated infection and insult of the colonic mucosa causes alteration in the structure and function. Stimulation of epithelial cell proliferation and thus colorectal cancer. 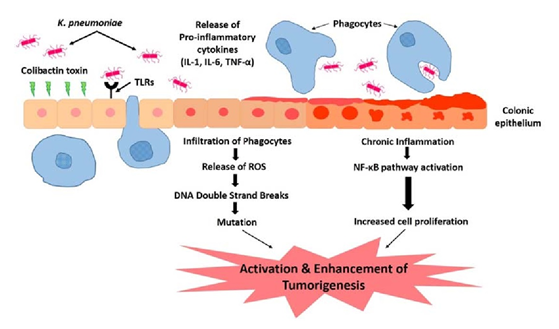 Other than these bacterial markers and associations, some metabolites can also be and have been used as diagnostic and prognostic markers, for its association with CRC. 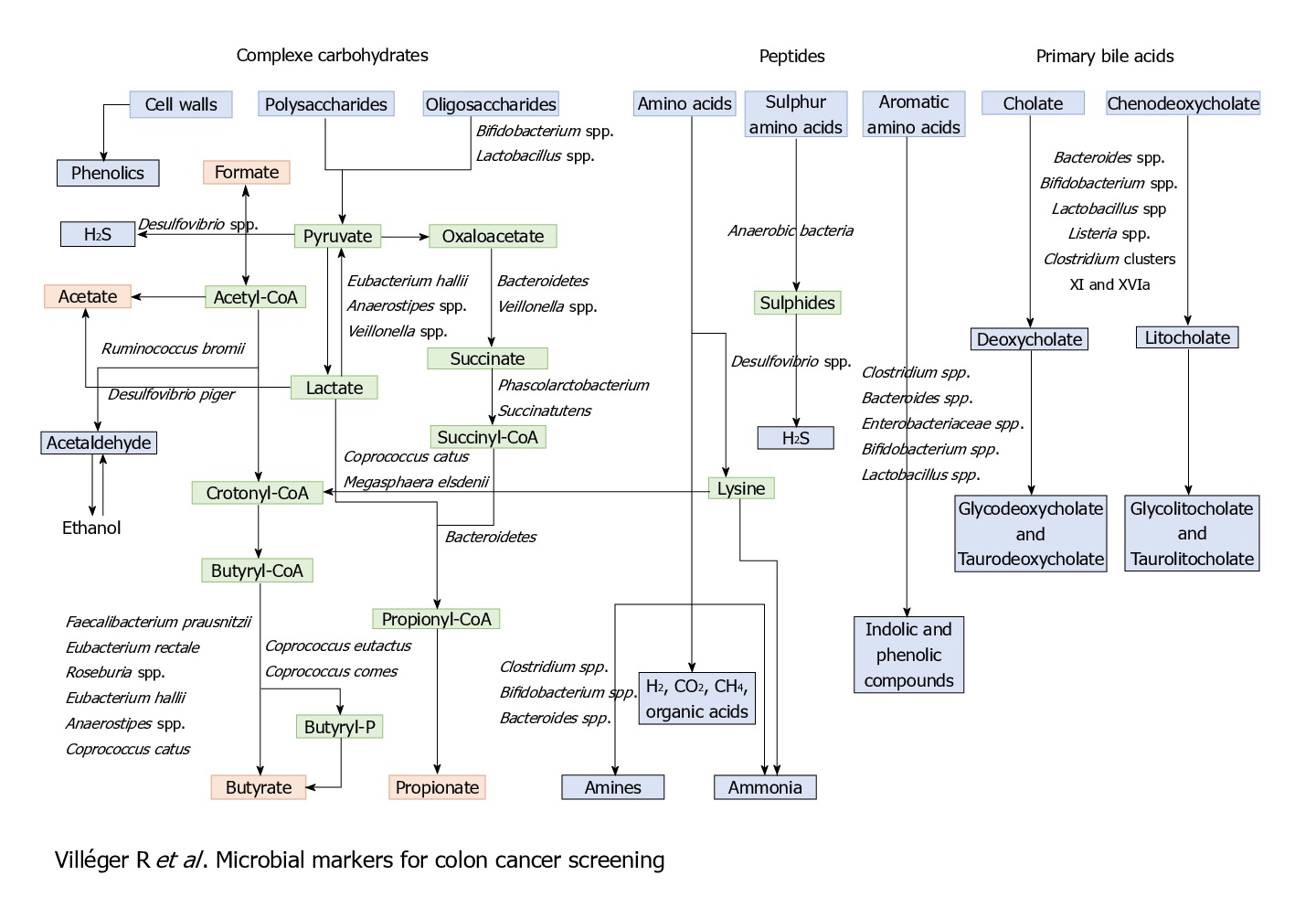 Microbiome and protection against cancer

On the opposite spectrum, the human microbiome has also been known to suppress tumour development and disease progression.

Like that of cancer trigger and progression, either some specific perturbations or presence/absence of specific microbial species/component suppress cancer and its progression. The mechanisms of suppression have been reported to range from augmentation dendritic cell function to increasing tumour-killing capabilities of cytotoxic T cells. But, more than these cellular mechanisms, it’s the metabolites generated by the microbiome which is known to play a major role in tumour suppression. For example, short-chain fatty acids (SCFAs) such as butyrate, generated by microbial fermentation of dietary fibres and resistant starches are extensively used as energy source by intestinal cells. However, tumour cells, which prefer glucose over butyrate, starve and suppress its growth or at least its progression at such low glucose conditions. Many such metabolites like butyrate (in gut) and others in skin has also been studied to reduce the incidence and multiplicity of tumours at various locations of the body.

Diet and nutritional habits have been strongly linked to CRC. This diet related risk is influenced by the balance between production of health-promoting microbial metabolites (ex. butyrate) and potentially carcinogenic metabolites (ex. secondary bile acids). Butyrate, a chemoprotective agent, acts as a histone deacetylase (HDAC) inhibitor capable of decreasing proliferation and increasing apoptosis in CRC cells. Butyrate could also diminish tumorigenesis by attenuating inflammation and colonocyte permeability and maintaining barrier function of the epithelium.

This relationship between the gut microbiota and CRC opens new approaches for cancer prevention. There are high quality experimental studies that yield the scientific evidences for the clinical use of probiotic in the prevention of CRC. Probiotic and prebiotic supplement can modify gut microbiota structure by reducing pathogenic gut microbiome and increasing probiotics. 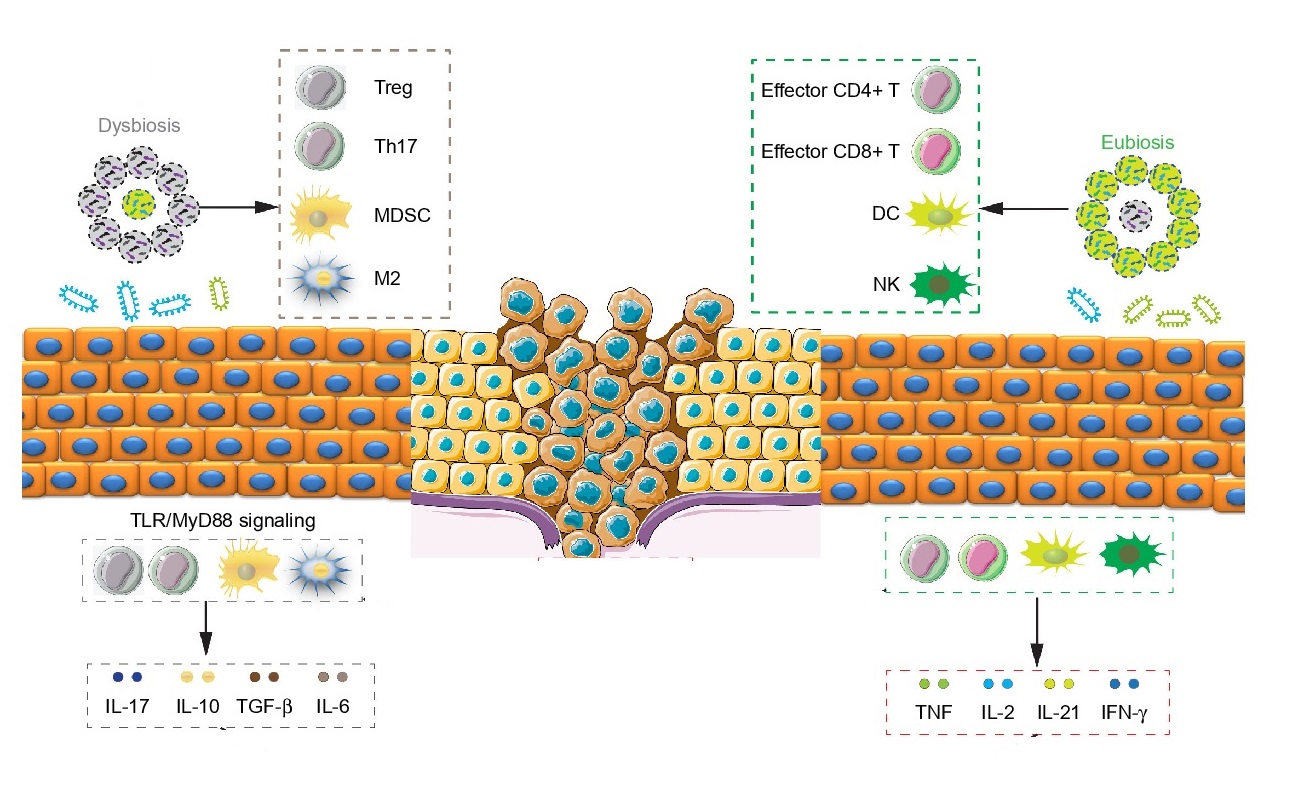 A significantly decreased polyp number was also seen in mice given Lactobacillus rhamnosus GG (LGG). Consumption of LGG helped maintain the overall functional potential and taxonomic profile in the resident microbes. A 25% decrease of total polyp counts were observed. Further, LGG enriched those microbes or microbial activities related to short-chain fatty acid production (e.g. Roseburia and Coprococcus). Furthermore, suppressed the ones that can lead to inflammation (e.g. Bilophila wadsworthia).

Numerous studies have shown that iron significantly influences the intestinal microbiota, its composition and abundance. Of these, Bifidobacteriaceae are capable of binding large amounts of iron in the large intestine., thereby limiting the formation of free radicals synthesized in the presence of iron. This is known to reduce the risk of colorectal cancer significantly. 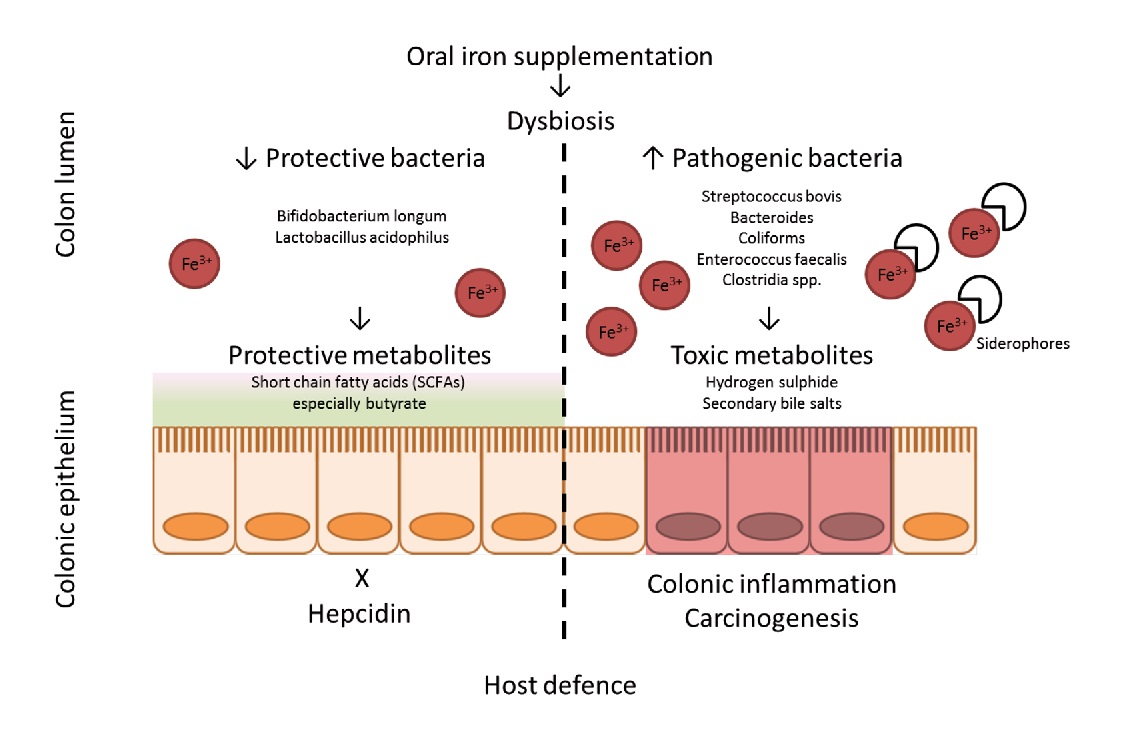 It been irrevocably established that the human microbiome has a tremendous effect on the human illness and wellness. While the relationship between gut microbiome and its effect on various gastroenteric diseases were well known, its significant impact on cancer and its therapy has recently gained momentum. Dysbiosis of gut microbiome is one the best studied associations for the colorectal cancer, apart from its genetic and lifestyle related triggers.

Even though these associations are well established with various animal and human studies, our knowledge is still limited. This limitation comes from the fact that the impact of the microbiome on cancer is multifactorial, with a major uncertainty that if the dysbiosis of the microbiome is cause or an effect. 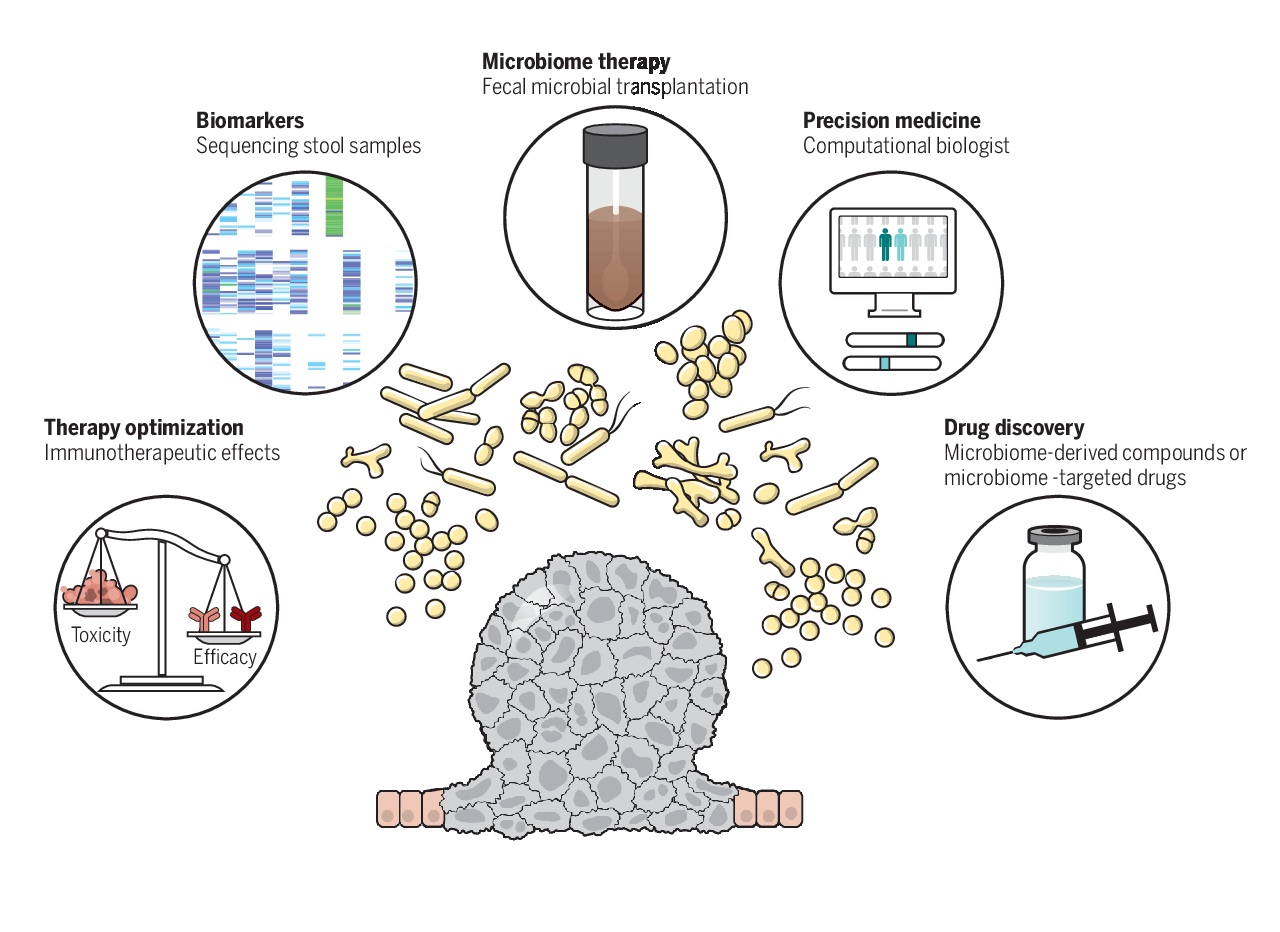 Even with these uncertainties, scientific community is optimistic that the next decade of research in the field of oncology will be dominated by an even greater integration of microbiome and its impact, which will drive the invention and discovery of novel microbiome derived therapeutics of cancer.