Weight loss for a better health through gut microbiota analysis

Overweight and obesity are defined as disproportionate body fat accumulation, and considered as a global epidemic. As per the World Health Organization report, over 1.9 billion adults remained as overweight in 2014, and among them, in excess of 600 million were found to be obese. The prevailing obesity is correlated to a number of health-threatening illnesses, such as arterial hypertension, coronary heart disease, stroke, type 2 diabetes mellitus, arthritis, and asthma to name a few. Besides, this condition has significant economic effects, i.e., increase of medical expenses for its treatment or related conditions, and secondarily it causes a reduced efficiency, incapacities and early mortality in patients. Typically, obesity is due to over consumption of high calorie food in addition to a sedentary daily life. Factors, such as including genetic predisposition, increased parent age, sleep deficiency, endocrine disorders, drug iatrogenesis and epigenetic changes also contribute to the onset of obesity.

In recent times, the gut microbiome constituting the overall collection of the genetic material of microorganisms inhabiting in the gut region has been observed to have implications in triggering obesity. Interestingly, the gut bacteria constitute nearly 250-800 times more number of genes than human genes. These bacterial genes produce substances/constituents that get into the human bloodstream, and upset the body’s biochemistry. These gut bacteria are known to play a vital role in many biological processes, such as digestion, metabolism, and absorption. Thus, they involve and contribute to the development of obesity and other metabolic disorders, which is attributed to the fact that they have the ability to produce more energy from the diet, regulate and influence the fatty acid composition, encourage inflammation, and also play a part in regulating appetite via the gut–brain axis.

Various pre-clinical and clinical investigations have correlated the gut microbiome to obesity. For example, from the data of animal studies, it is evidently proved that mice which are germfree can resist obesity, however, upon introducing gut microbes into their body, the animals increased their uptake of calories from the diet and advanced towards fat deposition, and became insulin resistant. Likewise, when the gut microbiota of obese mice were colonized into normal mice, they were able to harvest energy more proficiently and accumulated body fat rapidly. The analysis of 16S rRNA gene sequenced data of the gut microbiota obtained from the distal intestine in mice indicated that a distinctive pattern occurs between obese and lean animals with respect to the most important bacterial phyla, Bacteroidetes and Firmicutes. Similarly, there exists a declined population of Bacteroidetes in the obese population. However, in the same animals, an increased number of bacterial population belonging to the phylum, Firmicutes is observed. Also, clinical findings have supported the existence of a close relationship between the gut microbiome and obesity. But, the existence of dissimilarities in the gut microbiota at the phylum level between obese and lean persons still remains as contradictory, and yet to be clarified through investigations. Hence, the gut microbiome have a critical role in causing obesity, but the causative versus substantial relationship, and the degree of its influence in humans, still remains ambiguous.

At present, obesity can be addressed through the therapeutic preferences, such as lifestyle modifications (diet, physical exercises and behavioral therapies), pharmacological treatments, and weight loss surgery in the case of severity. Lifestyle modifications may help to lose the original bodyweight up to 5–10% on a long-term basis, though there is a possibility of regaining 30-50% of the lost weight within a few years. Pharmacological treatments endorse uncertain weight loss, nevertheless lead to side effects. In severe cases, Bariatric surgery is the preferred option, which promotes a significant weight loss and reduce mortality. Yet, a large number of patients experience reduced weight-loss effects, and after the treatment, the patients may regain weight up to 75% over a period of time. Thus, there is a need to use alternative approaches for overcoming these issues and benefit patients to reduce and accomplish a healthy weight. In this regard, the manipulation of gut microbiota is a very useful approach. 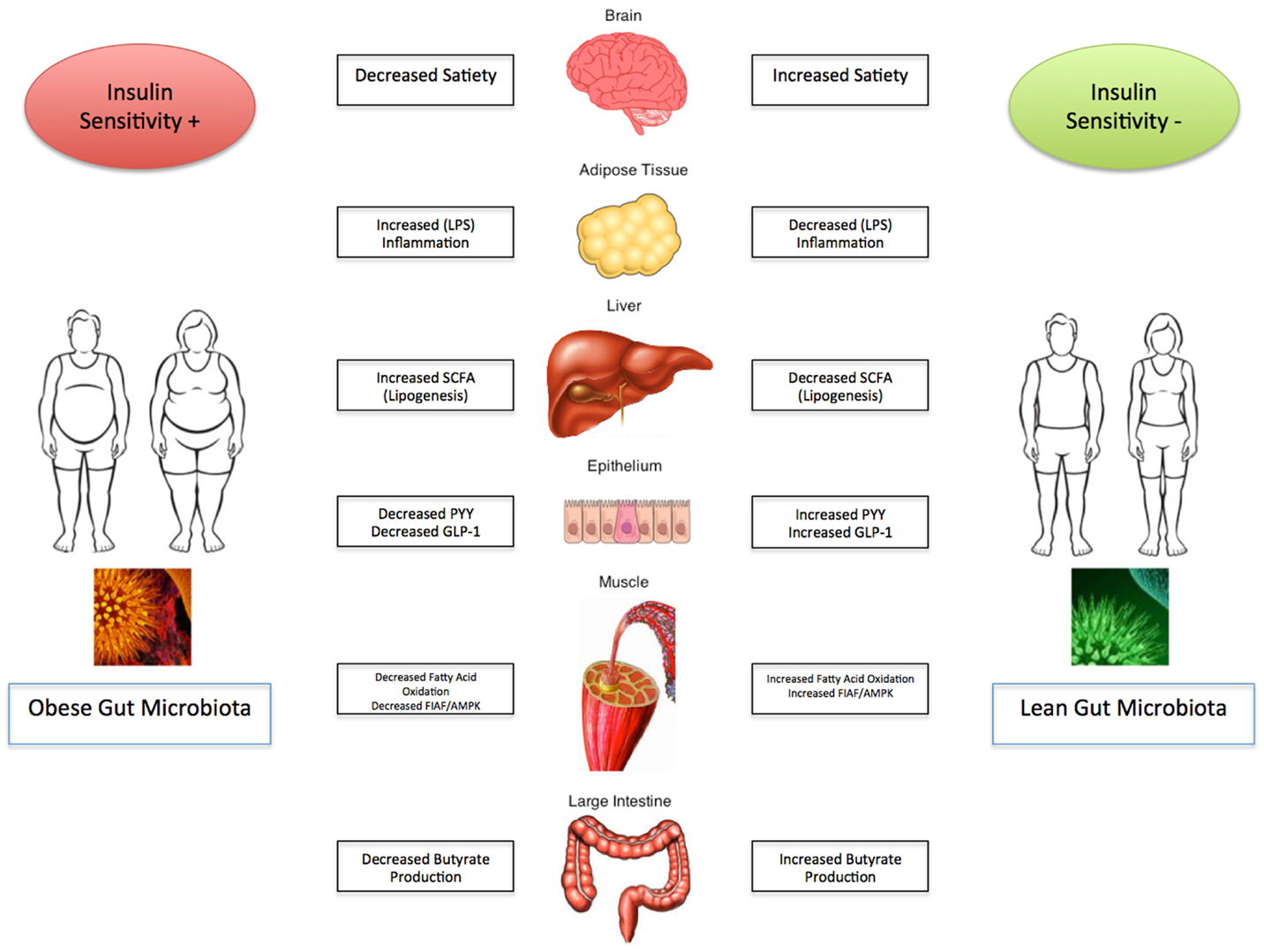 Imbalances in the gut microbiota are central to the pathogenesis of obesity. Hence, an optimal gut microbiota balance could be helpful in fixing this problem through a precise diet choice. Including lots of fiber, healthy proteins and fats in a diet improves the gut microbiome. Good fatty acids, such as omega−3 fatty acids and monounsaturated fatty acids, i.e., extra-virgin olive oil, avocados oil or almond oil improves good gut microflora, while inflammatory omega-6 fatty acids, i.e., vegetable oils (corn, safflower, cottonseed, sunflower, and soybean oils), promote the growth of bad microbes leading to diseases and weight gain. These bad microbes secrete toxins called lipopolysacchardies that trigger inflammation, pre-diabetes (insulin resistance) and consequently, stimulate weight gain. Even chronic stress and sleep deprivation can contribute to gut microbial imbalance. Hence, practicing a healthy life schedule will favor the growth of good microbes in the gut. Overall, the percentage of good bacteria in the gut decides on how much weight a person may lose or gain, and under what conditions. The best way to improve the gut microbiota with good bacteria is to eat a healthy diet having increased fiber, good fats, avoiding unprocessed and unrefined foods, probiotic supplementation, and reducing bad bugs with medication.

Already, microbiomics has become a new frontier in medicine and providing many health solutions. Therefore, the genomic analysis of gut microbiota can precisely suggest on the intake of food, and modifications required in the daily life for an overweight or obese persons in order to lose weight, and remain fit and healthy. The clinical application of weight modifications through the gut microbiota analysis still remains unclear. Hence, additional investigations are warranted to recommend its use as a therapeutic tool in the current clinical practice of treating obese and overweight individuals.