What happens in Vagus, does not stay in Vagus!!

So, it’s been two months past the new year. We all are coming back to our normal selves, we are eating (binging) whatever we want to, not so keen on working out or even waking up early...for that matter.

Now that we are enlightened about new year diets, workout regimes & resolutions, and have understood these to be just myths, we can actually focus on doing what we do best

"sit and ponder about everything"

Everything, from menial questions about career, marriage, relationships ... to ... more serious questions like - should I cook today or order pizza?... then to ... potentially life changing questions like... Why am I fat ?!!

We always talk about stuff that we eat going directly to our hips (especially for us girls, right?!)
Here is an interesting observation:
What if, the food we eat directly goes to (or affects) our head?
hmmm... Now that's a thing to ponder upon,
I mean how's that even possible?

Well, you might have heard or even felt that, when you are in stress you eat more, or when you are tensed you have gastric problems, or when you are hungry for long duration you get a headache. So, you know these things are somehow connected, and mostly seem to be related to the food that you eat.

But, in fact, this relationship, between your behavior and your food (more importantly the other way around), is surviving (read hanging in there) because of the tiny tenants in your body.

And this is where the story begins...

When you are in your mother's womb there are no microorganisms in your body, and you are virtually sterile, inside out!!

As a new-born, you are exposed, for the first time, to a wide array of microbes from a variety of sources, including maternal bacteria. The process of birth exposes you to the first microbes from your mother's vaginal tract or stomach, depending on the mode of birth. (fascinating? or you feeling eeeww?)

Later, your mother's milk gives you the major share of microbes, that actually help you build your immunity. In fact, a recent study talks about how infants born by cesarean section are at increased risk of asthma, obesity and Type 1 diabetes, as compared to babies born through normal labor and exposed to the maternal vaginal microbes.

As and when you start eating different kinds of foods, drinking beverages, use a specific kind of bathing soap etc., the microbiome (total microbes on and) in your body gets enriched. More specifically, your gut microbiota gets developed with every exposure to different environments. In fact, what you eat, drink, smoke, or gets exposed to, all defines the microbiota of your gut.

I still remember the day, when I had my first beer... and my gut microbes were like... bring it on girl!!

Another interesting fact is that, since diet and food habits are largely an extension of your culture, your gut microbiome differs from American's or Chinese, given that we all are culturally world apart, and so is our lifestyle and dietary habits.

The other side of the story…

On one end, the food you eat and drink affects the composition of your gut microbiota. However, over time, the enriched and developed gut microbiota influence the digestion of specific food you eat, indirectly influencing your diet. So, lot of these gut bacteria influence and more importantly help you digest food in an efficient way.

Another interesting fact is that, whenever these good bacteria goes low in number, it gives way for over growth of bad microbes like Clostridium, E. coli etc., that causes diseases like diarrhea, colitis, etc.

And why would these good bacteria go low in number?

Well... it can be due to any reason from imbalanced or untimely diet to exposure to antibiotics or smoking. One study found that after a single treatment of intravenous antibiotics, fecal bacteria demonstrated a significant change in the variety and abundance of bacterial strains.

Okay, now we are drifting

Studies, involving college kids (the junk eating generation), eating burgers and fries, guzzling cokes and sodas, observed that these students felt lethargic, largely unwell, depressed, with general fatigue, disturbed / unfocused mind, just after a few weeks of continuous ingestion of the junk diet. Testing their gut revealed that, and I quote “gut microbes (the microbiome) had been devastated”, with potential disease causing firmicutes replacing good Bacteroidetes, as the dominant type, while the friendly Bifidobacteria, that suppress various kinds of inflammation, halved in its abundance being the clearest marker of an unhealthy gut.

The question is why? and How does what you eat .... affecting your gut microbes... affect your state of mind?

The human gut microbiome is so dynamic and complex, that it consists of approximately 1 kg of bacteria in an average adult, and is approximately the weight of the human brain. This microbiota produce a myriad of neuroactive compounds, regulating everything from your behavior to cognitive function, social interaction to stress management. It regulates these brain functions by steering the "Vagus Nerve".

This thing called 'Vagus nerve' (Not "Vegas and Casinos") within your nervous system, is a part of cranial nerves unit, that forms an extensive network, linking your gut and brain. Creatively enough, termed as the gut brain axis, it is the sole reason for all the food and head related things. This system, largely involving the Vagus nerve, controls the body’s unconscious actions, such as digestion, excretion, and sexual arousal.

In the absence of certain (good) microbes, due to imbalanced diet (read junk eating), the neuroactive compounds, that regulate the above said unconscious actions, are profoundly altered. It turns out, what you eat changes the gut ecosystem, in turn resulting in altered vagal activity.

But, what happens in Vagus does not stay in Vagus!!

The cytokines produced during this imbalance, cross the blood-brain barrier, leading to decreased activity in brain, decreased activation of the vagal motor nuclei, inflammation and decrease in nerve conductance. The effects being anything from mild headaches to aberrant stress to long term depression. A causal association, between gut microbes and cognitive decline and disorders of cognitive function such as Alzheimer's disease and multi-infarct dementia (high prevalence after the age of 65 years), is already been studied.

Wait a minute, before, you thought, when you are in stress you eat more, or when you are tensed you have gastric problems, or when you are hungry for long duration you get a headache. Now you understand that these things are connected, but, possibly in the opposite order, where the food you eat cause the stress, gastric issues and headache. 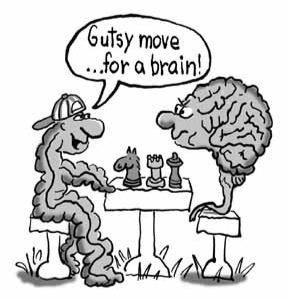 So, coming back the full circle, to where the story began...

The gut microbes (or the whole microbiome) play a very important role in your growth, wellbeing and longevity, from your birth to senility. In fact, it has been established that post-birth, the gut microbial colonization occurs in parallel with cognitive development. There is increasing evidence to support the view that the evolving cognitive activity is critically dependent on the microbiota and its metabolic activity. 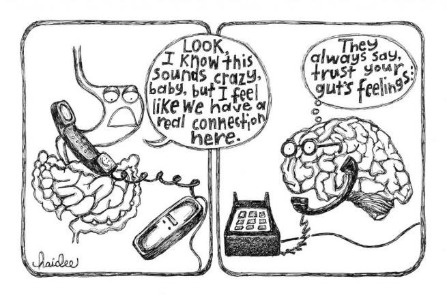 Now that’s a lot of pondering!!

So, the next time you think about a diet plan (especially the new year ones), or any resolution for that matter, listen to your gut and gradually change and adapt, without hitting the Vagus.

Or else, come and read this blog, again, next year!!