Have you ever felt butterflies in your stomach, trembling hands and voice, sweaty palms, racing heart beat and heavy breathing… and you feel just fine briefly after? sounds familiar?

At some point in our lives, everyone has experienced this; when teacher asked us to solve a math problem in front of the whole class, may be while performing on stage or while talking in front of a large crowd. These manifestations mostly arise out of dreaded situations and these outcomes you feel is cumulatively called as “Anxiety” and specifically these are temporary in nature and hence termed as “Occasional Anxiety”.

But, if you scan through scientific literature and articles, anxiety is almost always coupled with depression, and commonly used together.

Anxiety is a type of emotion or feeling wherein hypervigilance, attentional bias and nervousness conquer the person. Whereas, depression is an observable trait, significantly affecting daily routines and moods of the individual, how they feel and think and even have some long-term effects. Like occasional anxiety, temporary episodes or moderate intensity of depression are termed as “Temporary Depression”. But care should be taken not to confuse this with ‘Anxiety and Depressive Disorders’, whose symptoms can persist for longer time with greater tendency to become a full-blown disorder.

Until recently, all these mental health and neurological disorders, specifically Anxiety and Depressive Disorders, have largely been understood in a unidirectional way as a sole function of brain and its nervous system. But imagine something sneaky at play here, something subtler than brain, yet having a greater impact than brain.

The old friends and the Gut Brain Axis

Rook et. al. proposed the "old friends hypothesis”, as an extension of the famous hygiene hypothesis, which states that we humans have evolved with a bunch of friendly and non-friendly microorganisms, since thousands of years (as species) and from our birth (as individuals). This is specifically true with respect to our guts, where these microorganisms have thrived as an entire ecosystem with continuous availability of nutrition. Current estimates indicate that the human gut is occupied with approximately 100 trillion cells of different microorganisms, happily living within us.

The same GI tract is also intertwined with ~600 million nerves of ENS (Enteric Nervous System), which works along with CNS (Central Nervous System) bidirectionally, controlling various digestive functions. Until recently, this bidirectional crosstalk, known as "Gut Brain Axis" (GBA), was thought to maintain only the gastrointestinal homeostasis, some immune activation, enteric reflux and enteroendocrine signalling. A detailed account of this complex nervous system has been described in one of our other blogs “The Brain in Your Gut”

However, peaked interest in the gut microbiota and its sheer number in the gut (I mean, a 100 trillion is a lot!!), forced us to view the function of GBA under a different light. Which indeed led to our understanding that GBA is indulged in monitoring and connecting the emotional and cognitive parts of human brain to peripheral gut. Which in simpler terms says that “there is a new meaning for gut feeling”. (Know more here and here)

A 100 trillion microbial cells are constantly interacting with 600 million neurons, communicating and controlling everything from when you feel hungry to why you feel angry!!

It is critical to note that this is a two-way interface, and the interplay can happen from “microbiome-to-brain” or “from brain-to-microbiome”, which was a key aspect that was ignored before.

In its simplest form, it is a stress response.

Interleukin-6 (IL-6) is a component of immune system that gets released due to stress, which reduces the expression of glucocorticoid receptors and over activates the hypothalamic pituitary adrenal (HPA) axis (a kind of brain and hormonal interaction). This ends up in over activating the inflammatory reactions leading to increased pro-inflammatory cytokines and stress-induced cortisone. Increased level of cortisone is a risk factor or is strongly associated with anxiety.

On the other hand, same stress can change your gut microbiota (composition and abundance).

Several intestinal microbes are capable of reducing anxiety and are largely considered beneficial to us. Predominantly, Lactobacillus rhamnosus and few more from the genus Lactobacillus and Bifidobacterium, are specifically capable of this function, through their anti-inflammatory and anti-oxidant actions. These beneficial bacteria can negate the inflammatory effects caused by IL6 and in turn reduce anxiety. However, the same stress can reduce the abundance of such beneficial bacteria, in turn increasing the risk for anxiety. 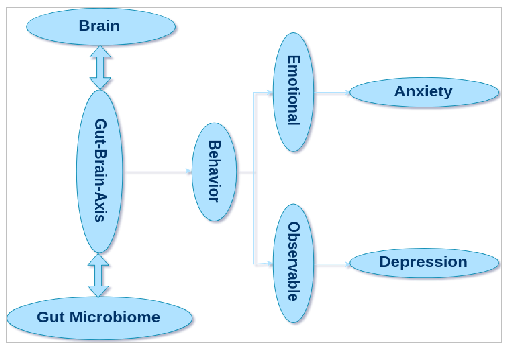 Microbiome to Brain – The Leaky Gut

Stress can also change your microbiota (composition and abundance), activating other components of this complex system, “inducing” anxiety and/or depression.

Some intestinal bacteria produce toxins, known as Lipopolysaccharide (LPS), which disturb the intestinal environment and its permeability. The disruption of the intestinal barrier can lead to entry of these toxins in the blood, a phenomenon popularly known as “leaky gut”. Later, LPS can disrupt the blood-brain barrier (which is very hard to do), enter brain and modulate mood and behaviour by increasing the activity of amygdala in the brain.

If unchecked, this also allows for entry of other environmental toxins and harmful agents, which increases the pro-inflammatory cytokines and neurotransmitter norepinephrine, and many other factors, leading to development of depression.

Several such behavioural changes, with direct or indirect involvement of gut microbiota, has been reported and studied till date, some of which are detailed here and here.

Now that we know that this is a two-way streak and changes in gut microbiome can affect brain and its functions, several combinations of probiotics and prebiotics, either as solitary or as combined supplementations, has been tested, under the collective name of “Psychobiotics”. The ultimate goal is either to manipulate or to naturally have a gut microbiota, enriched with commensals that can maintain healthy neural, behavioural, cognitive and emotional functions.